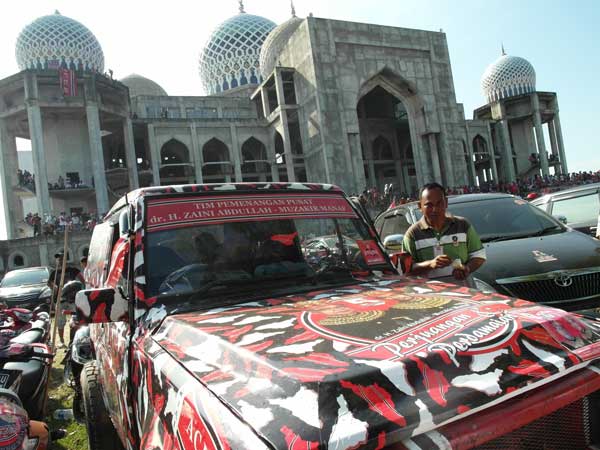 Well it’s official. The Partai Aceh candidates for Governor and Vice Governor will rule Indonesia’s most fractious province for the next five years. Their election campaign was a strange mix of proto-militarism and religious fervour. At every rally, hundreds of the young men who are the party’s most fanatical supporters stood in serried ranks in red, black and white “camouflage” uniforms, saluting the candidates, one of whom is a rather homey doctor who has spent most of his adult life in Sweden. They (and I) listened also to sermons about how Partai Aceh would keep the province free of “kaffir” religions — anything that is not Islam, effectively. There were strange digressions about protecting the territory from the Jews, although to my knowledge the Jewish community is, uuuum, somewhat under-represented in Indonesia as a whole, let alone in Aceh.

As he formally acknowledged his election, the doctor from Sweden, Zaini Abdullah, said he would seek to implement a “purer” form of Islamic Sharia law. His bitter rival in this election, former governor Irwandi, is seen by some to have sold out because he refused to sign a bill implementing Sharia law, finding some if its provisions too harsh. Stoning adulterers to death, for example. I’ll be interested to see how Zaini Abdullah negotiates this one. His running mate, the former guerilla commander Muzakir Manaf (who looks like he’s been sent over to Party headquarters by Central Casting), is widely known to have at least five wives. That’s one more than is allowed by Sharia law (which, says Zaini, “is about how to educate our youths about what is right and wrong”). Technically, then, the Vice Governor is an adulterer. Will Partai Aceh’s dedication to purity put it’s own number two at risk of death? Watch this space.

Sheet happens, yes, but does the mob really rule in Indonesia?