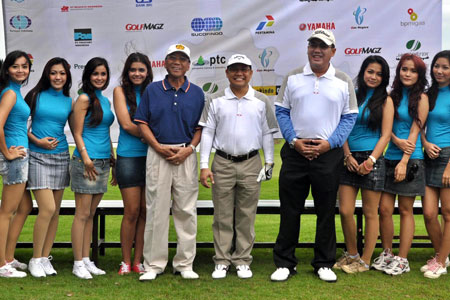 Who should we arrest? Indonesian ministers pose with golf caddies in soon-to-be-illegal mini-skirts (Photo: Rakya Merdeka)

Indonesia’s government has reacted to the uncomfortable clash between its prudish self-image and its lascivious reality in the way that it deals with most of this culturally scattered nation’s manifold contradictions: legislate, then fail to enforce. The controversial anti-pornography bill was first passed in 2008. Many people, especially women who could be prosecuted under the law for exposing undefined body parts, were furious. The law was put on hold while civil rights groups argued in the country’s highest court that it was unconstitutional, in part because pornography was not clearly defined. Would the temple carvings of central Java and Bali have to be dismantled because they qualify as “erotic art works”, prohibited by the law for example? The constitutional court in 2010 ruled that the definition of pornography in the bill was just fine, and that the law should be enacted.

It seems more than likely that SBY resurrected this issue now because he is trying to distract attention from a (quite sensible but wildly unpopular) move to cut subsidies on fuel, as well as an ongoing corruption soap opera involving his own party.

Is Indonesia becoming a country of thugs and sycophants?