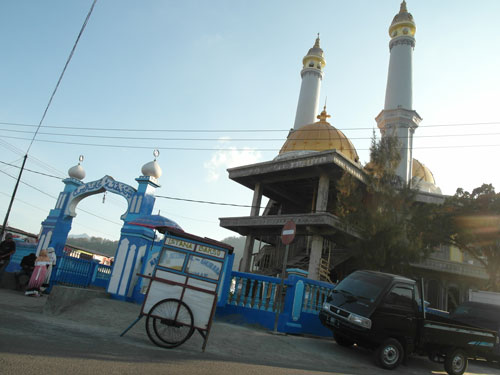 A mosque rising between two churches in Bajawa, in largely Catholic Flores

Does it matter to the police what religion I profess? Or to the people who are processing health insurance cards, or to the airline staff checking that I match the name on my ticket? Yes it does, is the implication of Indonesia’s rule that a citizen’s religion must be stipulated on their ID card. Actually, not just any religion, but one off a menu of six: you can be Protestant, Catholic, Moslem, Buddhist, Hindu or — the most recent addition — Confucian. There’s no “Other”, where Jews, Rastafarians or the practitioners of the dozens of faiths dismissed in Indonesia as “folk religions” might find refuge. And there is certainly no “None”, since atheism is excluded by the first principle of the state philosophy, Pancasila: Belief in One Supreme God. Indonesia’s Hindus — overwhelmingly concentrated in the single island of Bali — have convinced the bureaucrats that there’s a Supreme Leader among their many Gods. I’ve met adherents to other religions who opt for “Hindu” on their ID cards because its pantheism is closest to their own beliefs, those that put the forces of nature and many ancestors at the core of their spiritual life.

The new government appears to want to reinforce religious pluralism, though in a particularly low-key, Indonesian way: by just allowing people to leave the entry for religion blank. (I prefer the Egyptian response to the same issue: Egyptians have been covering the religion line on their ID cards with “none of your business” stickers.) Even a blank, however, is too much for religious hardliners. Correction: for Sunni Moslem hardliners. Because everyone who has objected to dropping religion from the ID card is a member of Indonesia’s overwhelming religious majority.

This raises an interesting issue. Catholic and Protestants have been known to fight senseless wars that undermine the very principles of their faith, especially in the UK and Ireland. But they are both branches of the Christian religion. Indonesia for some reason feels the need to recognise the plurality in the Christian church. But it refuses to recognise the plurality in its majority faith, Islam. Overwhelmingly the greatest victims of religious intolerance in Indonesia are members of minority branches of Islam: Shia and Ahmadyiah in particular. These are the groups most often victimised and killed by the good, Wahabi-trained gentlemen who have appointed themselves Guardians of the Faith in Indonesia.

For the last decade, these Thugs in God’s Name have got their own way on most things. Still now, they are exercising their petty powers, recently by shutting down a workshop that aimed to help youngsters avoid internet grooming as fundamentalists. The worst of the the thugs, the Islamic Defenders’Front or FPI, have just bulldozed their way into an area of East Java that tried to keep them out. They can do this because the local authorities let them. The workshop in Yogyakarta was actually shut by the police, not the thugs. Neither the police nor legislators in the East Java district of Tulungagung would join residents in taking a stand against the new FPI branch office. This passage, from the Jakarta Globe, is instructive.

Adj. Sr. Comr. Bastoni, chief of Tulungagung Police, confirmed that he had no grounds to bar the FPI without evidence of the group breaking the law.
“If they start performing anarchy, radicalism, violating the law and hampering police work, we will take strict action,” Bastoni said.

Anarchy, radicalism, breaking the law and making life difficult for the police are, however, all activities that are close to the collective heart of a mob that hit headlines most recently for a riot in Jakarta that badly wounded several police officers.
…
Nurkholis, the acting head of FPI Tulungagung, said the organization had long been misunderstood. … Nurkholis said that his men would only trespass on business premises if the police ignored their letters asking that establishments in violation of Islamic law be closed.

“In violation of Islamic law?” But Indonesia is not an Islamic state, and does not espouse Islamic law (though local governments can impose such laws — and often do, in areas where they think it will squeeze support from religious leaders (pdf).

Is the spineless response to religious bullying about to end? It might, for two reasons. One is that the acting governor of Jakarta Basuki Tjahaja Purnama (aka Ahok) is taking on the bullies. Ahok, a man with balls bigger than the egos of most Indonesian politicians* — which is saying something — is under constant threat from the FPI; they don’t want him to govern Jakarta because he is Christian and Chinese. Ahok has formally appealed for the FPI to be banned on the grounds that spreading sectarian hatred is forbidden by many laws, including the constitution. The very fact that Ahok is demonstrating that the state has more power than the thugs should stiffen the spines of authorities in other parts of Indonesia.

The second reason is that the police, which helped birth the FPI as a counterweight to pro-democracy demonstrators in the late 1990s,(see Ian Wilson’s brilliant paper “As Long as It’s Halal: Islamic Preman in Jakarta”) seem to be getting a little fed up with them, not least because the FPI injured 16 policemen in a recent demo. If politicians, who have been frightened of the FPI, and the police, who have been protecting them, both turn against the religious gangsters, the name of Allah will be less frequently abused in Indonesia.

*If you speak Indonesian, I urge you to watch the equally fearless Andy Noya’s interview with Ahok.

2 Comments on "In the name of God [bad things happen]"