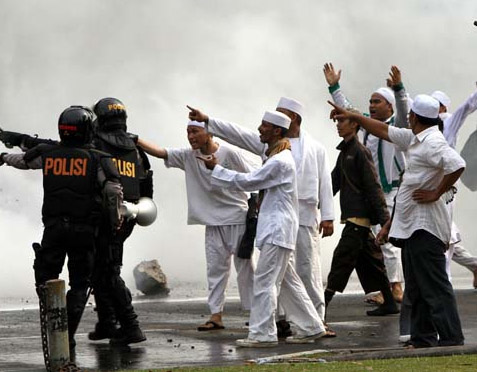 With a first draft of Indonesia Etc: Exploring the Improbable Nation now sitting on my editor’s desk, I finally have time to get back to musing on this blog about Indonesia’s delights and contradictions.

In writing the book, I’ve had a lot of time to think about the way language and culture mirror one another. And I’ve also found myself inadvertently agreeing with the leadership of the ever-more-thuggish Islamic Defenders Front (FPI), though not in a good way.

Back in July, when the Islamic warriors were defending the morality of the people of Kendal by trying to smash up those bars that hadn’t paid enough protection money, the good people of Kendal fought back. Dashing to get away, the FPI ran over and killed a member of the very public whose soul they had hoped to protect through their violence.

FPI leaders have spouted a great deal of nonsense since then. But as FPI Chairman Munarman sought to blame everyone but the organisation he heads for the senseless violence and death that his follower caused, he said something that struck a chord with me. How come when a member of the FPI does something bad the whole organisation gets blamed, he asked, while in any other institution in Indonesia, that person is immediately labelled an “oknum”?

He’s got a point.

The dictionary will tell you that “oknum” means “individual”. Let’s plug that in to some newspaper headlines:

Oknum does not just mean individual, it means “person in an official position who is doing something naughty”. It is most often used of policemen and soldiers but also of MPs, judges and government officials who have been caught with their hand in the till or on some starlet’s bum. The implication, of course, is that if you are a servant of the state and have been caught doing something you shouldn’t do, you are no longer a member of the armed forces, or the judiciary, or the government; you are disowned.

In other words, the organs of state accept no responsibility for the conduct of their staff; in Indonesia, the State can do no wrong. No-one ever seems to question this side-stepping of responsibility. With the government setting endless examples of bad behaviour by “oknum”, which almost never have repercussions for the institutions to which they belong, it is hardly surprising that bully-boys who like to put on white dresses and orchestrate mass violence are reluctant to stand up and take the heat for the actions of the rabbles that they have roused.

Is Indonesia becoming a country of thugs and sycophants?

Be the first to comment on "The FPI is (half) right: they must be more responsible thugs"