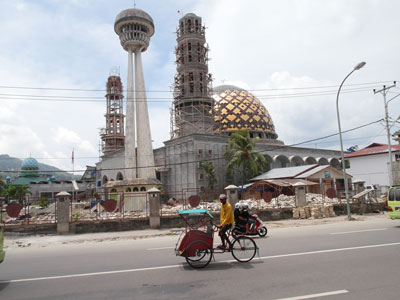 Commentators on Indonesia’s parliamentary elections have been surprised by the relatively poor performance of front-runners PDIP (see the FT, the Jakarta Post, the Jakarta Globe for examples). But the real surprise is surely the much better than expected showing by Islamic parties.

Islamic parties have seen their share of the vote slide steadily over the years. Just last week, the New York Times predicted that the PPP, the oldest Islamic party, would fail to make the threshold for parliamentary seats (parties need to have 3.5% of the popular vote to take up seats in the national parliament). The QuickCount suggests that in fact, they’ve won close to seven percent of votes. So too has the PKS, a Moslem Brotherhood-style party thought to be irreparably damaged by corruption scandals and the much-shared image of one of its legislators watching porn on his tablet in a plenary session of parliament — not a smart move for someone whose party made the Anti-Pornography bill a political centrepiece. (I note that during this election a PKS candidate in Kalimantan is demanding his bribe money back, complaining that he passed out 23 envelopes containing 150,000 rupiah each to voters in a village where he eventually only got two votes.)

PAN, a moderate Islamic party with strong nationalist tendencies, did better still; the QuickCount currently has them at close to eight percent.

The best performer in the Islamic stable was the PKB, which seems to have raked in over nine percent of votes. This is not, the party insists, because it selected pop singer Rhoma Irama as its presidential candidate. Pundits predicted that fewer than one in five Indonesians would vote for an Islamic party in these elections, but it looks like closer to one in three actually voted religious. Since any party or coalition representing over a quarter of the popular vote or a fifth of seats in parliament can nominate someone to run in July’s presidential elections, the Islamic parties could certainly field a presidential candidate if they were able to agree on one. That seems highly unlikely; one of the reasons there are so many parties in Indonesia is that most are simply vehicles for the egos of individual presidential hopefuls.

I’ve said in the past that the vast majority of Indonesians don’t really want to mix religion with politics. Do yesterday’s results prove me and others wrong? I’m not in Indonesia now, and I can’t get out and talk to people in Sumatra, in Kalimantan, in East Java about how they voted and why. But my strong suspicion is that many people voted for Islamic parties as a protest against the endless bickering of the (predominantly secular) parties who have been locked in an uncomfortable coalition for too many years. The irony is that splitting the vote yet more evenly across the parties, secular and religious, is almost certainly going to lead to more bickering, and more legislative gridlock. Let the horse-trading begin.

Be the first to comment on "More Moslem than expected: the real surprise of Indonesia’s polls"