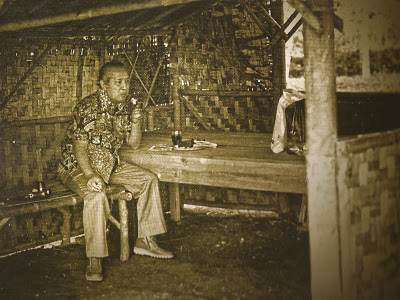 The fount of all corruption? (Photo: Pak Harto: The Untold Stories)

In building the nation, right now we’re tending to implement liberal values that are clearly not appropriate, that in fact contradict the values, culture and character of the Indonesian nation. It’s time for Indonesia to take corrective action, not by stopping the reform process now underway, but by launching a mental revolution to forge a new paradigm, political culture and approach to nation building that is more humane, appropriate to the archipelago’s culture, down-to-earth and sustainable.

I’m sorry if the translation is clumsy, but I am trying to be faithful to our visionary candidate’s two sentence rallying call.

Some commentators have interpreted Jokowi’s op-ed piece as cry against apathy. If that were the case, I’d understand. In months of travelling the outer islands of Indonesia (and sometimes the inner ones too), I grew used to hearing people complain endlessly about the slings and arrows of outrageous corruption. When asked why they didn’t use any of their endless elections to change things (Indonesians now appoint people to at least seven different elected positions in any five-year democratic cycle) everyone gave the same answer: “Kami orang kecil, apa boleh buat?” “We’re just small people, what can we do?” I heard it from plenty of small people, but also from local businesswomen and contractors, headmasters and hospital directors, even from the district heads of some government departments. That level of apathy makes change difficult, it’s true. But reading Jokowi’s tract, I don’t see any recipe for changing that.

What I do see (along with a slightly surprising call for a strong military) is a lot of demonising the Suharto era as the birth-mother of Indonesia’s corruption. This is to ignore a rich lineage of entitlement and patronage that can easily be traced to pre-colonial times. There’s a lot of old, Sukarno-era rhetoric about the evils of foreign capital. (“Our natural resources are being drained by multinational companies together with (their) Indonesian comparadors” says Jokowi. Compardors? Really?) I also see knee-jerk whining about globalisation’s undermining of Indonesian culture, and a clarion call for education that stresses discipline, religion and morality. What I decidedly don’t see is any sensible critique of the current government’s underinvestment in infrastructure, its failure to instil curiousity or initiative in schoolkids, its tacit promotion of frivolous consumption. And there’s no hint that the “Indonesian” values Jokowi wants to revive may be little more than a chimera; that in this extraordinarily multi-cultural country, a decade and a half of rampant decentralisation might have done far more to erode any shared national mindset than a few years of rampant Facebooking.

I really hope that this tract is more push-button electioneering (with a nod to the sensibilities of Mother Mega) than it is a real reflection of Jokowi’s own mental processes. It would be a great disappointment if his blueprint for Indonesia’s future were, as this piece suggests, actually firmly grounded in the errors of demagogues past.

2 Comments on "Has Jokowi gone mental?"