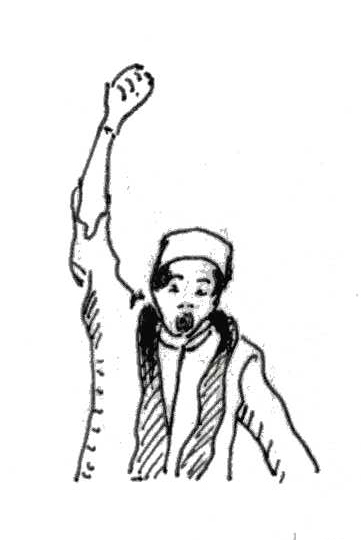 Watching Indonesia from far away through the filter of the Twittering classes and foreign news coverage, it’s hard not to be mildly despairing that new president Joko Widodo’s promise of a Mental Revolution has melted so quickly back into playground politics.

I could list the kerfuffle about police virginity tests, the race to the lowest common denominator in education, the Vice-President’s suggestion that mothers shouldn’t be allowed to work so much and — my personal favourite — the effort that Indonesia’s sportsmen put into cheating (something that we also saw during the Olympics, and that I’ve written about before in the context of schoolkids).

But all of this nonsense pales by comparison with the Islamic Defenders Front (FPI)’s latest charade: the thugs-with-prayer-mats, cross that the can’t seem to intimidate no-nonsense Jakarta governor Basuki Tjahaja Purnama (aka Ahok), have simply decided to “inaugurate” a governor more to their liking, according to the Jakarta Post.

Fahrurozzi was “sworn in” by the head of the Betawi Brotherhood Forum (FBR) and member of the Jakarta Saviors Presidium, Luthfi Hakim, who stated that Fahrurozzi, coordinator of the Jakarta Community Movement (GMJ), would begin his duties as Jakarta governor effective immediately
….
“If anyone [other than Fahrurozzi] claims to be the governor of Jakarta and visits your neighborhood, you must reject him because Jakarta’s true governor is now Fahrurozzi Ishak,” he said confidently.

The FPI has never been very grown-up, and it would be really easy to dismiss this as just more of their nonsense. But they are more or less duplicating the equally childish behaviour of the government. MPs belonging to the minority ruling coalition, disappointed that they didn’t get any of the key posts when the spoils were handed out in the new parliament, just decided to create a fantasy parallel structure. The bickering in the playground subsided for a while after the bully-boys in the majority opposition coalition agreed to give away some of the (smaller) sweeties. Inexplicably, the president then set the sulking off again by telling his ministers not to show up if summoned by parliament. There was some perceived interference in the internal affairs of Golkar, the largest opposition party, which is engaged in its own squabble-fest, and now no-one is talking to anyone else and government is more or less at a standstill.

When my brother and I bickered as children, my long-suffering mother would occasionally explode: “If you two don’t stop that, I’ll knock your heads together!” It didn’t happen often, and it shut us up right away. The trouble in Indonesia now seems (through the long-distance filter of the Twittersphere and the Jakarta-centric press) to be that everyone is involved in the bickering; there’s currently no adult supervision at all. If this goes on for too much longer, there’s a danger that a self-appointed “adult” will step in and start forcibly knocking heads together. An “adult” who, in his recent presidential campaign, has made no secret of his preference for a return to the iron-fisted political discipline of the Suharto years, for example. It is a consummation devoutly to be guarded against.

The truth about Indonesia? See for yourself: Free multimedia eBook taster