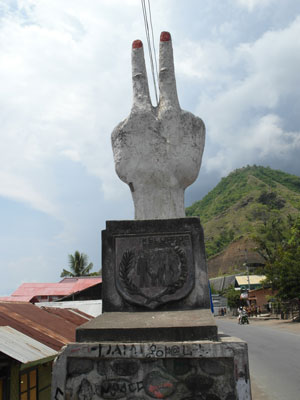 When I first lived in Indonesia, in the not-entirely-golden age of Suharto, family planning was one of the government’s core priorities. So much so, they’d take people on safari for free. These family planning safaris involved laying out the camp beds, slapping women down on them and shoving an IUD up them. Though the programme improved hugely in later years, it remained sullied by its coercive infancy. When responsibility for reproductive health devolved to the districts, it was a rare Bupati who dared to make contraception a priority.

One of the results is that Indonesia’s population has just passed the 241 million mark. That’s one in 30 of the people on this planet. Another consequence is that one very rarely sees any public support for family planning. So I couldn’t resist stopping to photograph this hang-over from the Suharto years, which stands outside the central Flores town of Ende. (I took exactly the same photograph in 1989 — the fuck-off gesture amused me even then). The statue refers to the campaign’s central slogan: “Dua Cukup!” (Two is Enough). It was often accompanied by another hand gesture, the universal gesture for “Stop here!”, an open palm held out at arm’s length.

The two fingers flicked, then five fingers in your face gave its name to the state-sponsored brand of condom: 25 (Dua Lima). This somehow tickled me, and I mentioned it to my riding companions, two medical technicians from Jakarta who were installing equipment in the hospital here. The younger of the two looked completely blank. “Huh? Family Planning? I thought it was a peace sign”.

It’s surprising to me that the only places I’ve seen any sign at all of the family planning programme (now with the slogan Two is Better), is in Flores, the only Catholic-majority island. In many other places, the family planning programme seems to be completely moribund. Lamentable. Dua Lima condoms have vanished, too. A lot less lamentable. Especially when they’ve been replaced by cheap and high quality brands such as Fiesta and Sutra.