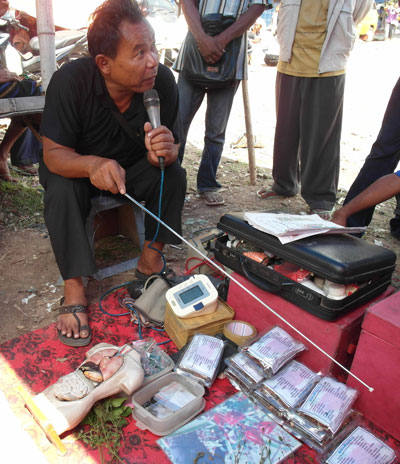 Last year, the Wellcome Collection in London had a glorious exhibition of anatomical models, called Exquisite Bodies. They were accompanied by banners from the fairs and markets where these models used to be shown. In the prudish Victorian age, they were often the only glimpse people got of naked bodies other than their own. Part education, part pornography, all entertainment.

In the country markets of Indonesia, these models still take pride of place, though I’m not sure “exquisite” quite describes them. The sellers of herbs, patent medicines and quack cures are the only people in the market with loudhailers, sometimes even electronic sound systems. They hang their stalls about with photos of largely naked inhabitants of Papua, Indonesia’s Eastern-most province and the source of many miracle cures. And they use their models to illustrate the many benefits of whatever it is they are selling. My personal favourite was the gentleman who covered his bets by selling large heaps of tobacco as well as “Raja Gunung”, the King of the Mountains, a herbal remedy guaranteed to cure lung cancer.

Two fingers up for family planning