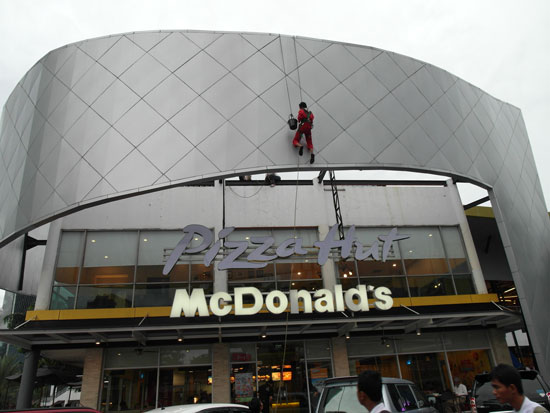 2014 seems to have begun with a burst of excitement about “Indonesia” in the foreign media. BBC Radio 4 this morning ran an excellent analysis of the country’s prospects by economist Jim O’Neill, the bloke that invented the term BRICS to describe the boom economies of the 2000s. He proposes the MINTs for the 2010s (Mexico, Indonesia, Nigeria and Turkey), though now he’s going around visiting them all, he seems less sure that they are poised to take over the world. (If the Radio 4 link didn’t work for you, try this one from the World Service)

The Wall Street Journal gives us an ecstatic piece about a new generation of selfless young leaders, and the Financial Times follows up with a profile of one of those leaders, a favourite of mine, the Mayoress of Surabaya Tri Risma Hartini.

But all of this excitement is not actually about “Indonesia” at all. It revolves around the stories of the country’s two biggest urban conglomerations, home to perhaps 35 million people in total. O’Neill sounds almost surprised in Jakarta to find quite such a plush carpeting of golden shopping malls and trendy bars populated by home-owning, English-speaking middle-class yuppies, though he draws a nice contrast with some of their less fortunate colleagues, who face ghastly commutes to jerry-built suburbs, and with the Jakarta residents least often visited by business analysts and economists, the ones who live in the oft-flooded slums. In their optimistic WSJ piece about the new political generation, Ben Otto and Andreas Ismar cite examples from Jakarta, Bandung and Surabaya. They collectively ignore what’s going on in the rest of the country, home to another 215 million Indonesians. And the picture there is often very different. That’s true even of other parts of better-educated, highly urbanised Java. It’s lovely to grasp at saviour figures in Indonesian politics (ironic, isn’t it, that current darling Joko Widodo used to be a carpenter?). But for a more representative picture of what the present system is delivering, take a look at Michael Buehler’s mind-boggling mapping of dynastic succession and patronage in local politics.

I’m really sorry that Jim O’Neill spent his whole five-day visit to Indonesia in Jakarta. Had he had the opportunity to travel to other parts of the country, I think he would have come closer to answering the question that underpins his article as well as the WSJ’s piece: will Indonesia ever realise its full potential? What is missing from his otherwise excellent report is any real sense of the constraints imposed on progress by Indonesia’s current political structure, it’s extraordinary level of democratic decentralisation. With the probable exception of Finance Minister Chatib Basri, even most of the ruling and business elite that O’Neill talked to in Jakarta has no real grasp of how very little influence the capital has on what goes on in the rest of the country.

Yes, Jakarta could change investment policies to encourage more infrastructure investment. But as long as the actual investment decisions are made at the level of the 509 districts and cities, many opportunities for vital, large-scale, regionally joined-up projects will be missed. And some of the things it needs to do it can’t. “Can [the Indonesian leadership] deal with cronyism?” O’Neill asks at the conclusion of his piece. For now, the answer is a clear no. Right now patronage from Jakarta (and the crony structure through which it works) is the glue that keeps this increasingly diverse country together.