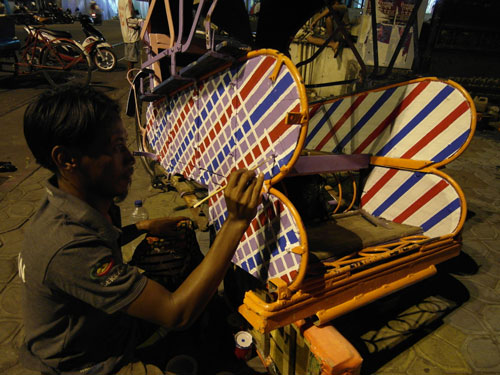 Tomorrow ushers in a new era for Indonesian politics. For the first time since 1957, when then president Sukarno did away with parliamentary democracy, the country will have an executive and a legislature that have different loyalties. But for the first time, too, there may be a chance of amputating the ageing hands that have so leadenly guided the nation’s political parties for the past decade and a half.

As I said in an essay in the Nikkei Asian Review today, incoming president Joko Widodo must first throw off the sclerosis imposed by his own party chairman. Of the news stories I read while in Indonesia recently, few were as shocking to me as a report from the PDIP headquarters after the party re-elected Megawati as chairman for a further five years. Here are some quotes from that Jakarta Globe story by Markus Junianto Sihahoho & Yeremia Sukoyo:

“Other people [not of Sukarno’s bloodline] should just be a secretary general at most,” he said.
…
Megawati’s daughter, Puan Maharani, widely seen as the next leader of the PDI-P, denied her mother’s renomination evinced a failure within the party to regenerate.”

Indonesians are fond of joking that their (for-now) elected local government heads — the bupatis and walikotas that wield huge power over most aspects of people’s daily lives — have become like raja kecil, “little kings”. True, though the fact that they have for the last 10 years had to answer to the electorate has arguably made at least some of them less venal. But when the leaders of a national party talk quite literally of bloodlines, it is no joke. Ms. Megawati and her daughter would do well to examine the recent fate of India’s Congress I party. There’s no place for dynasty politics in a Republic.

It’s not just PDIP, of course, which is beholden to characters of a bygone age. Golkar, Gerindra, the Democrat Party and a few others bow still to political has-beens. Jokowi needs to engage in political horse-trading to stay alive in the shark-pit of national politics. But I hope that he’ll have the sense to start making those trades with a younger generation, with politicians who at least try to represent the tens of millions of want-to-bes in the Indonesian electorate.

Slideshow: A Tale of two cities

Be the first to comment on "Jokowi’s first task: undermine dynasty politics"