Poor David Cameron; something always seems to steal his thunder. During his visit to Indonesia today, it was two huge earthquakes in Aceh. I’m in Aceh just now, and was watching his press conference on Indonesian TV when the room started to shake and we had to tear ourselves away from his platitudes. The UK Prime Minister is reportedly looking for business for UK companies. If investment decisions were based on need, or on the impact they might have on the daily lives of poorer people, Cameron might encourage UK businesses to turn his blah blah about bridge-building into something more concrete. In the last couple of months I’ve been in two of Indonesia’s richer provinces, Aceh in the extreme west, and Papua in the far east. In both, there are shocking lapses in investment in infrastructure — lapses that make life miserable for kids on their way to school, women on their way to sell vegetables in the market, people trying to scrape together a living running motorbike or pick-up truck taxi services.

The high-wire act that passes for a bridge near Tangse, in northeast Aceh, shown in the video is the remains of a wooden bridge washed out by a massive flash flood in early 2010 — what the locals call “our tsunami”. Although there are still millions of dollars sloshing around in unspent funds donated for reconstruction after the 2004 tsunami, nothing had been done to fix this bridge 18 months after its evaporation. You’ll have to excuse the shaky filming — I had to keep one hand on the wire as I crossed…. 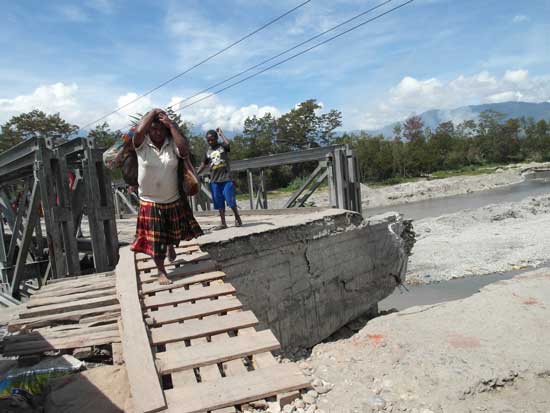 A woman carries vegetables to market across a half-collapsed bridge outside Wamena, Papua

This other photo was taken in Wamena, in the stunning central highlands of the country’s richest province, Papua. Wamena is the main town in the highlands, and this bridge is on the main road out of town, linking the hospitals, markets and high-schools of town with the rural hinterlands. Or rather not linking them; motorbikes can get across but it has been months since a truck or minibus made the leap.

It’s sobering to see the people of Aceh’s reaction to today’s earthquakes, even in the hills where I am just now and where there’s no risk of a tsunami. The girl I was talking to went so faint that she to had to be helped out of the building for the second earthquake, 8.8 on the Richter scale. A little later, still shaky, she told me that she had lost several family members in the 2004 tsunami. She also agreed with someone’s only half-joking suggestion that this was the earth’s reaction to Monday’s elections in Aceh. These were comprehensively won by Partai Aceh, the political offspring of the GAM guerilla movement improbably directed out of Sweden. Though they’ve been widely accused of election-related manipulation, violence and intimidation, Partai Aceh played the Peace card in this election. But they played it upside down. Rather than say: “if you vote for us, we’ll keep the peace”, the rank and file, at any rate, were saying: “if you don’t vote for us, your precious peace will be no more”.

I rather suspect Partai Aceh would have won even without the scare tactics. But Earthquake-Girl’s reaction to my idiocy (as I wandered back in to the shaking building to get my computer) reminded me of this fact: the more people know the bitter taste of fear, the more effectively it controls their behaviour. The people of Aceh spent the 15 years to 2005 finding corpses by the roadside in the morning, trembling at midnight knocks on the door from guerillas and soldiers alike, being shaken down for cash, rice, a motorbike. They’ll vote for anything that avoids a return to that.