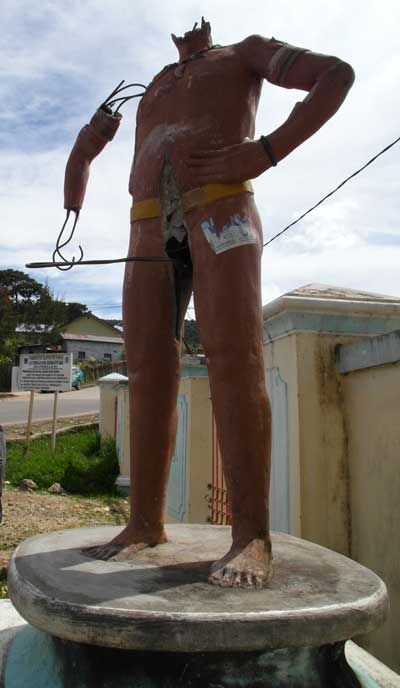 A statue outside a health centre in Enarotali, in Indonesian Papua

Reading the newspapers in cities across Papua, I cannot help but notice the full-colour ads for penis extensions. In only half an hour, with no invasive anything, men can see their organs grow, thicken, harden, for ever. The ads are explicit about the results, down to the last half centimetre; clients can choose both the length and girth of their organ, up to 20 cm by 6 cm (the more modest promise diameters of just 5.5). All of this with just some magic oil and a few prayers, guaranteed free of side effects. The “Specialists in Vital Organs” promise services for women, too, tightening up our fannies “until you are like a maiden again”. And for both sexes, they will pray away our sexually transmitted infections.

Why the obsession with sex organs, and why especially in Papua? Are people encouraged by the blatantly erotic sculptures that are common in these parts? Do migrants from other parts of Indonesia feel inadequate on arrival in Papua, or do they feel the magic will be especially potent in the nether regions of the nation? And isn’t it mildly ironic that all of the people offering their dick-swelling charms claim to be from Banten in western Java, where mystics sometimes break their fasts by eating light-bulbs? They offer other mystical services too: tying down your spouse, implanting a protective aura, ensuring you get promoted or elected. But most of their force is expended on delivering: “What other people only promise, we prove with results that are Large and Long”.

It turns out that the penis obsession is not, in fact, confined to the tens of thousands of immigrants from the rest of Indonesia who have been sucked east by Papua’s booming economy. I learned this when I asked a Papuan nurse in one of the province’s largest hospitals what brought men to outpatient services. Three things, he said: injuries resulting from violent fights, injuries resulting from traffic accidents, and prison. Prison? Do people get sick in prison? “No, that’s the penis stuff.” Prisoners, Papuans and others, are operating on one another’s members — inserting ball bearings and biro parts, threading hair through the urethra. A doctor friend who ran an STI clinic in Papua for many years says he saw a lot of penises embellished with horse hair, but the nurse said since that’s in short supply in prison people weave ornaments from their own locks. Not surprisingly, many of these go septic, hence the hospital visits.

A more serious aside: data newly released by the Indonesian Ministry of Health show that one in four of the Papuan women who are selling sex to their men-folk on the streets of the Papuan highland town of Wamena are infected with HIV, while well over half have another STI. Perhaps because condoms don’t fit snugly over the horsehair, three in four of these infected highland women are not using protection with their partners.

The essentials of life: handphones where there’s no power