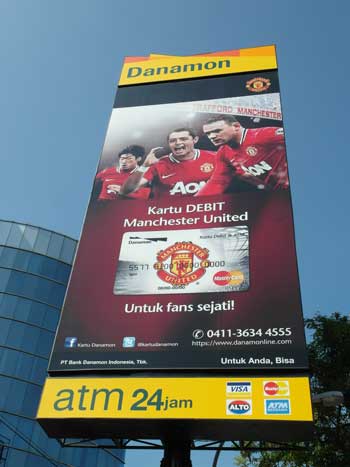 Dari mana? Where are you from? It’s the first question most rural Indonesians ask. To simplify things, I just say England. Twenty years ago, there was only one response: Wah! Inggris! Lady Di! Now, there are two: Wah! Inggris! David Beckham! and Wah! Inggris! Manchester United!

I mentioned this at a discussion in the UK’s House of Lords the other night hosted by the BBC World Service ideas programme, The Forum. A lot of very clever people were discussing how Britain was perceived in the world: Britain stands for Democracy, I heard, for Fair Play, for Tolerance. Odd how everywhere I go, it stands for football and royals.

I mention this because the current issue of Inside Indonesia asks a similar question about Indonesia, but it turns it inside out. Not “What does Indonesia mean to the world?”, more “What does the world mean to Indonesia?” The piece about West Java by Julian Millie is especially worth a read. He describes “cosmopolitan” as a dirty word, demonised in large part by the kyai, preachers in the local Islamic schools.

“Many rural Muslims consider Indonesia’s mainstream culture, with its pronounced western influences, something to be wary of. An increase in consumption-related media has brought with it advertising images showing independent, individualistic lifestyles. These urban images are disconcerting to people trying to live an Islamic lifestyle, and the kyai provides an alternative message.”

I would replace a single word in that analysis, replacing “Islamic” with “Javanese”. Millie is absolutely right that poor, rural Moslems in Java (including the Sundanese in West Java and other communities in Banten) feel threatened by “urban images”. In every other island I visited in travels that took me over 42,000 kilometres round and about Indonesia last year, people complained of corruption, bureaucracy and the slings and arrows of outrageous decentralisation. In Java, the bogeyman of KKN was replaced by “loe loe, gue gue“. The expression — literally “you you, me me” in Jakarta slang — describes the rampant egotism of the Big Durian, the dog-eat-dog culture which has taken over Indonesia’s capital and which is pumped in to small villages in an endless stream of sinetron soap operas. It represents the breakdown not of religious values, but of society itself: the gotong royong, keluarga besar values that are the foundation of life in Java and other islands respectively. It was what everyone in rural Java seemed to fear most: if things go on like this, we’ll be just like Jakarta, loe loe, gue gue.

Mille, the always thought-provoking Gerry Van Klinken, and Sue Ingham all question whether “cosmopolitan” (and the celebration/abhorrence of mall-and-fast-food culture that goes with it) maps on to “Western” in the Indonesian world-view, as well as in the world’s view of Indonesia. As the diversity of articles in this issue of Inside Indonesia attests, it’s a question that can’t be answered, precisely because Indonesia itself is so diverse, so historically cosmopolitan, indeed.

It made me think again about how Brits perceive the way they are perceived. “Wah! Inggris! Demokrasi dan Toleransi!” — it’s something I’ve never heard. But “Manchester United!” That’s a value which is shared by both Indonesians who read Cosmopolitan and Indonesians who burn it.

Sheet happens, yes, but does the mob really rule in Indonesia?

2 Comments on "Indonesia vs the UK: who’s more cosmopolitain?"