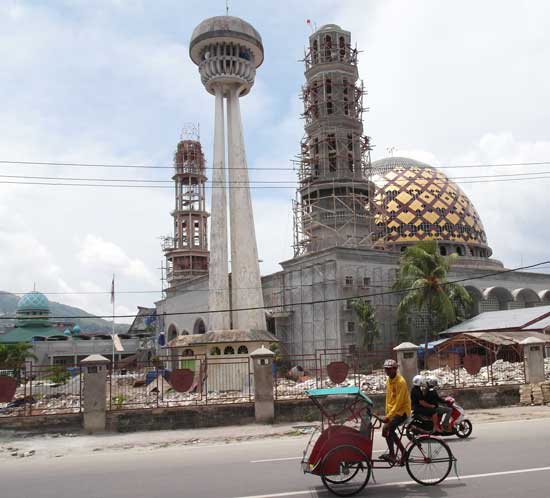 A new mosque being built in the centre of Ambon, a Christian-majority city that often sees outbreaks of religious violence

One of the mysteries of life in Indonesia is how the government and the security forces allow absolute chaos, sometimes even mass murder, to develop in totally predictable ways. As groups such as the Islamic Defenders Front (Front Pembela Islam or FPI in Indonesian) move around the country beating up hookers and inciting violence against non-Moslems, the President and his ministers play Three Monkeys — see no evil, hear no evil, and therefore never have to speak about any evil. Their dereliction of duty is such that the Dayak tribe in Kalimantan has finally taken matters into its own hands, taking over the airport’s runway to prevent FPI leaders getting off a plane to sow their poison. (As an aside, the manager of a large nightclub in north Jakarta told me a while ago that she pays the FPI substantial “protection” money.They’ve exchanged their leather jackets for white robes, she said, but it’s the same old thugs.)

Lest we forget: way back in 1999, thousands of frenzied young men from the overcrowded Islamic heartland of East Java shipped out to predominantly Christian Ambon to support their brothers in a largely trumped-up fight about supposed religious insults. This group, known as Laskar Jihad, something of a sister organisation to FPI, did not hide their intentions and they apparently didn’t need to; some of the boatloads of rabid jihadis were waved off by government ministers keen to boost their ratings with Moslem voters. The result was a three year pogrom which spread across the eastern province of Maluku, in which 9,000 people are thought to have died. Communities were torn apart, previously mixed areas were taken over by a single religious group, and the was a spate of symbolic dick-wagging, expressed mostly through religious architecture, that persists to this day. The photo above is of a gargantuan mosque being built in the very heart of formerly Christian Ambon; huge churches are springing too, though only in subsections of the city where Christians have kept their strongholds.

The conflict in Maluku was shut down after 9/11, as international tolerance for religious (and particularly Islamic) extremism fell well below zero. This rather suggests that if the security forces did want to prevent these conflicts, which tend to be massively lucrative for the police and the army, they could. And indeed there’s some evidence that their swift action when I was in the region in November/December pre-empted a potentially bloody Christmas. But the scars of the conflict in Maluku are still deeply felt. Kalimantan, too, has its scars; at about the time Laskar Jihad was wreaking havoc in Maluku, the Dyaks, a tribe known in part for their propensity to cut the heads off their enemies, were in bloody battle with settlers from Madura. Their refusal to host the bigwigs of FPI suggests they’d like to pre-empt more unnecessary conflict. FPI is not Laskar Jihad — the latter supposedly disbanded after the Bali bombings in 2002. But its leaders were inciting FPI members to violent action in Maluku as recently as last September. “We’ve issued an edict to all FPI members throughout the nation to get ready to leave for Ambon to defend Moslems” the FPI’s Secretary General Muhammad Shabri Lubishe told the Voice of al-Islam website. (The story rated 236 Facebook “Likes”.)

Some commentators see the Dayak’s action as a turning point in Indonesia’s tolerance for groups that provoke violence. I’m not so sure. When the middle class intellectuals of Jakarta drew strength from the Dayaks and staged a protest against FPI in central Jakarta, the police turned pussy. They asked protesters to disband because they had reports that FPI were on the way and they couldn’t guarantee the safety of protesters. The response of Indonesia’s spineless president, Susilo Bambang Yudhoyono is even less encouraging. “Why should others be allowed to carry out their activities while our brothers in the FPI are forbidden?,” he asked journalists at a press conference. Because it’s a thuggish organisation which burns down buildings and injures and kills individuals to stop them doing completely legal things such as selling alcohol and running nightclubs, perhaps?