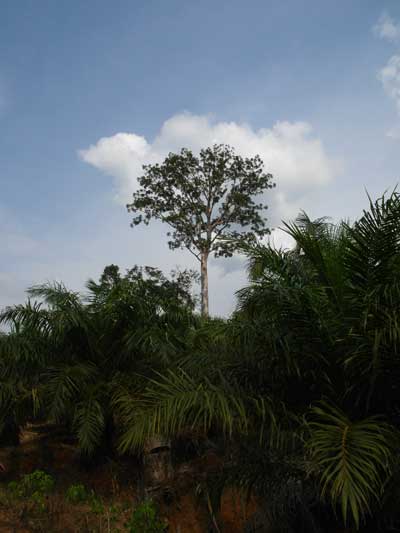 A honey tree, abandoned by its bees, rises from an oil plam plantation in Sumatra

The photo above is of a honey tree. The Orang Rimba, who have for centuries hunted and gathered their way around the forests of what is now the Sumatran province of Jambi, have been collecting honey from this tree for as long as anyone can remember. (If you squint, you might be able to see the pegs they have driven in to the side of the tree to climb its great heights.) “Now the bees don’t want to come here any more,” said Gentar, a Rimba man who currently stays with his family under a nearby palm tree. “There’s nothing for them to eat in a palm oil plantation.”

The area where Gentar lives is at the edge of the Bukit Duabelas national park. Or it should be, but the edge of the park keeps moving, shrinking back towards the core as people hungry for land on which to grow rubber and oil palm take their chain-saws to the “protected” area. These people, incidentally, include Orang Rimba, who increasingly need cash to buy things that the shrinking forest can no longer provide (food, treatment for previously unknown diseases). They also need cash to buy things that help them generate cash more quickly, most notably chainsaws, motorbikes and handphones. Cutting down trees because so many trees have been cut down: a particularly vicious vicious circle. (An aside: I try to avoid the monk-on-a-cellphone type of cliche, but I did do a double take at the well-formed man in a loin cloth riding a Honda.)

Indonesia’s laws related to national forests are confused. I need to do more homework around this, but my understanding is that under conservation law humans aren’t allowed to live in national parks, while under human rights law, indigenous communities are allowed to use national park land in ways that maintain their customs and traditions. One of the customs and traditions of Orang Rimba is clearing patches of forest to plant subsistence crops such as cassava. But does that extend to clearing forest to plant a cash crop such as rubber? Does a tradition from the era of the axe hold in the era of the chainsaw?

The bulk of the deforestation comes not from Orang Rimba themselves but from people who clear land in large quantities and and parcel it up to sell to smallholders who want to plug in to the commodity boom that is fertilising the rococo mansions that now sprout around plantation areas. I rode for an hour on Gentar’s motorbike from the place where the original 2004 National Park boundary marker used to be (it has now disappeared) to the first sign of any primary forest. The last few hundred yards were littered with the skeletons of trees that had been felled in the previous few days. In four days in and around the park I did not see any indication that the National Park was being protected in any way. No forestry patrols, no rangers, no boundary markers, not even any of those futile “Clearing of land prohibited” signs. Also, no bees.

For those interested in the challenges faced by ancient hunter-gatherer cultures seduced and/or assaulted by modernity, I recommend Butet Manurung’s The Jungle School, an account of her struggle with the notion (and practice) of educating Orang Rimba children. Including Gentar.

Slideshow: The Rimba – Nomads of the plantation