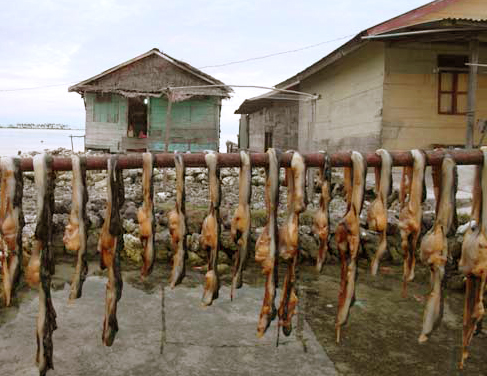 Giant clams hung out to dry in front of a fisherman's house in Pulau Banyak, Aceh

Indonesian food is varied and generally wonderful, though in out of the way spots like Pulau Banyak, off the West coast of Aceh, the choice for travelers is not extensive. I eat whatever is on offer on any given day at the one food stall in town — usually indeterminate fish in a yellowish or a reddish gravy. Yesterday the gravy was yellowish, and the first mouthful took me back to my grandmother’s kitchen. I was eating clam, of a very, very delicious sort. The cook’s husband, seeing my pleasure, rummaged behind the stove and came out with a clam shell about a foot across. “This is it’s shell”, he said. “They’re getting harder and harder to find.” 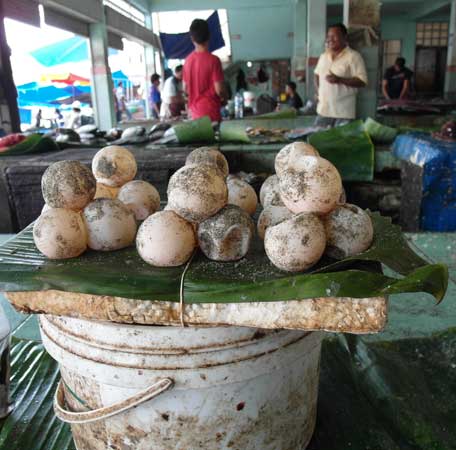 Turtle eggs for sale in Banda Aceh market. One pile sells for under two dollars.

I don’t think giant clams are officially an endangered species, but I still wondered if I should feel guilty about eating one. Getting moral about what we eat presents us with so many dilemmas. I’ve always been surprised by moral vegetarians who happily eat fish. That’s the one thing that we still hunt in the wild, despite their getting harder and harder to find — surely that makes fish more morally problematic that meat which is bred for consumption? Giant clams are probably a no, though they are widely available here (and so very, very delicious). Turtle eggs are a definite no; there are even regulations against selling them, thanks in part to the work of conservation NGOs such as Yayasan Pulau Banyak. But that didn’t stop a young neighbour of the NGOs pleading with me to bring some back for her from the turtle breeding island of Bangkaru: “I’m pregnant. It’s my duty to eat things which are good for me”. And it doesn’t stop the traders in the main market in Banda Aceh, the provincial capital, selling them quite openly. A clutch of seven goes for just 20,000 rupiah, about US$ 1.80. I have no moral dilemma at all over turtle eggs; I don’t eat them. Though that may be because the only time I’ve ever tried them, in this very province some 20 years ago, I felt like I was eating slightly fishy snot bombs. If they were very, very delicious, I might be more conflicted.

A requiem for Indonesia’s national parks