Ubud is an expatirate encampment in the hills of Bali made famous by a dashing Brazilian who rode in on a white charger and saved Elizabeth Gilbert from boring the world to death with sun salutations. And it’s here that I’m suffering an attack of incurable Yoga Rage.

In a town where it is virtually impossible to get Indonesian school books or a pair of sandals without beadwork, there are a dozen or more shops selling yoga kit. Touchy feely 100% guarantted organic cotton yoga kit. Enough to make anyone cross. Not just me, apparently: 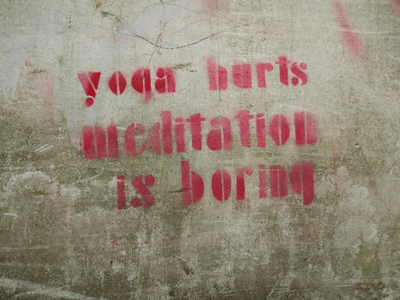 Someone had such bad Yoga Rage that they made a graffiti template. I was still chuckling when, not five minutes up the road, I encountered a Yogi prostrate with laughter, despite the fact that it looks very much as if his business is going down the drain. 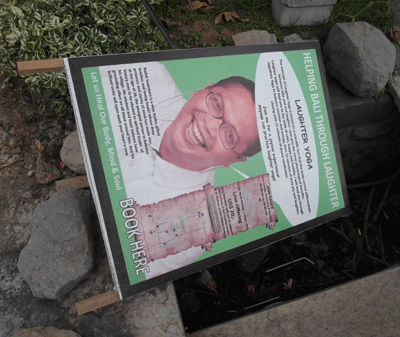 What drugs are they on? Madness in Indonesia’s jails