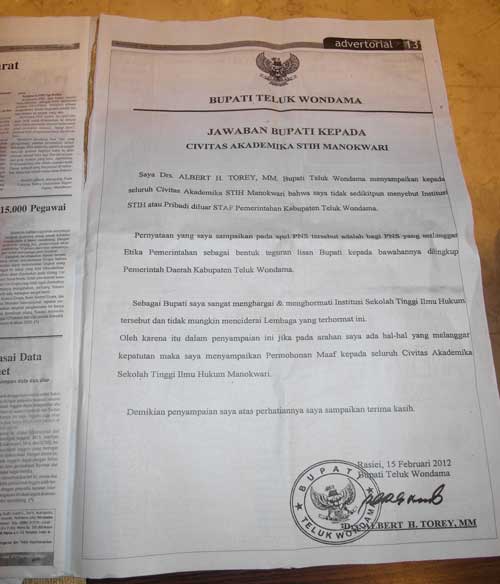 When a senior Papuan politician said recently that Papua was not ready for democracy I was mildly shocked. “The people are not mature yet, neither are the political elite. They are not ready to accept defeat, which results in them resorting to violence. Organizers of elections in the regencies are terrorized and intimidated. People are prone anarchic acts,” Yop Kagoya, the deputy speaker of Papua legislative council,told the Jakarta Post.

There’s no shortage of vociferous calls for self-determination for Indonesia’s easternmost region. But the more one reads the papers here, the more one tends to agree that if Papuan politicians and voters really want to determine their own future, inside our outside of the embrace of Indonesia, they have a bit of growing up to do. In Tolikara district, elections that have already been postponed for two years were put off again this month as running battles broke out between supporters of different candidates. Today’s paper reported 46 people killed in the last couple of weeks; the death toll in Puncak in recent months has been even higher. When I heard that the Vice Bupati (Vice Regent, i.e. Number Two in government) in Wamena, the biggest city in the populous highlands of Papua had been wounded by an arrow and his adjutant killed, I assumed they were attacked by political opponents. (In fact, they were trying to put a stop to a brawl that began with an unpaid motorcycle taxi fare, and turned in to a riot several hundred strong.)

Looking for news about the Wamena incident, I came across the full-page ad pictured above. It was taken out by the Bupati of Teluk Wondama district, Albert Torey. He’s apologising to the graduates of a local institute of higher education for calling them all “gutter-snipes” (more specifically, he said they had crawled out of the Konto river, a stinking, garbage-strewn drainage canal in the West Papua provincial capital of Manokwari). His comment was apparently prompted by his disgust with his running-mate, the Vice Bupati, who is a graduate of the school. The Vice-Bupati ran the shop in Teluk Wondama for the eight months that the good Mr. Torey spent in rehab for drug use –he and his wife were caught taking meta-amphetamines last April. According to local journalists I happened to gossip with in a cafe in Manokwari, Mr Torey (now comfortably back in office) is snarky because his deputy did such a good job when he was away. Nothing like a bit of good governance to make your superiors uncomfortable.

The college was so upset by the gutter-snipe comment that it threatened to sue for defamation unless the Bupati printed an apology. This is a slightly more grown-up way of dealing with conflict than reaching for the bows and arrows, but it still smacks of kids fighting in the sand-pit. Needless to say, the constant squabbling and even outright violence that appear to be the hallmark of Papuan politics are a drag on development. As much out of habit as anything, Papuan voters still tend to blame development failures on the wicked government in Jakarta. But sooner or later they are going to have to take a closer look at their own leaders, and indeed their own behaviour, and ask themselves what role they play in holding back development in one of Asia’s richest territories.

The essentials of life: handphones where there’s no power

Be the first to comment on "Note to Papuan politicians: Democracy is for grown-ups"