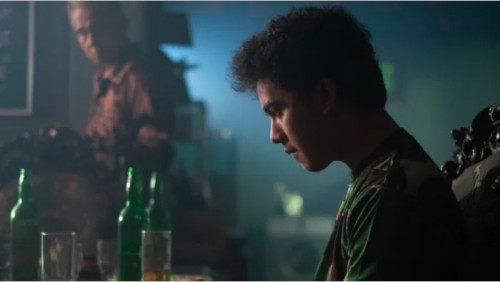 Last night, at the London Film Festival, I watched Makbul Mubarak’s Autobiography — the most thought-provoking film I’ve seen in a long while.

Makbul takes a clear-eyed look at the enduring feudalism in Indonesian society. Set in 2017, it is easy to read this as a comment on the legacy of colonialism and the Suharto years. People are cowed into obedience by those in power; all opposition is silenced, now as it was then. But as I watched the all-too-familiar scenes of an electorate parroting their support for the local elites (now in the new democratic uniform of batik — see the trailer here), I wondered about the implications of blaming the New Order.

It’s over two decades since The Smiling General fell from international grace. It’s 18 years since every Indonesian adult has been able to vote directly for their head of government, both locally and nationally. If an ex-general runs to become District Head, there is no shortage of other candidates to choose from (the single false note in Autobiography was the absence of endless rival campaign posters). Yet, as Ed Aspinall and others have pointed out, voters frequently choose the same-old same-olds. If Indonesians perpetuate old systems, might it be that that’s simply the easiest thing to do? Is it not part of the human condition to confer on others (humans or deities) the power to resolve our own problems, thus to outsource the effort of improving our lives, or to rationalise not bothering to take responsibility, or both?

Autobiography is a must-see film for its depiction of this dynamic in Indonesia. But if you substituted Etonians or the scions of corporate robber-barons for the place occupied by the military in this film and set it in the UK or the US, the story would work almost as well. It’s great to see young Indonesians scratching at their history, especially when they do it in such a beautifully Caravaggio-in-the-looking-glass way (watch Autobiography on a big screen if you can). But don’t expect a reckoning with the New Order to deliver a less hierarchy-bound Indonesia. You don’t need a recent history of military dictatorship to land a government that delivers to the haves at the expense of the have-nots. As Boris Johnson and Donald Trump have shown, you just need  an electorate ready — desperate, even — to buy the dreams you peddle.

Why won’t my Indonesian friends watch The Act of Killing?