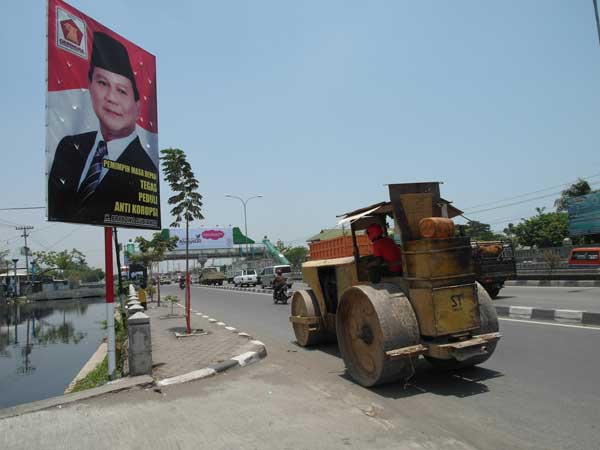 With two televised debates down and three to go, opinion is divided on which of Indonesia’s two presidential candidates is looking most, well, presidential. Jokowi did better than expected in the first debate, by many accounts (see for example ANU’s Greg Fealy), though as Unspun points out, he was much helped by his wily old Buginese running mate, Jusuf Kalla. Pitched one-on-one in the second debate, Prabowo seems to be gaining ground. A new opinion poll suggests that Prabowo may have overtaken Jokowi in the electability stakes.

In a new essay in Foreign Affairs, written before we knew the final list of candidates, I argue that the results of the presidential election won’t affect most Indonesians’ lives as much as many Jakarta-watchers think, as long as Indonesia’s current highly decentralised political structure holds. But if Prabowo wins, he may well try to pull power back to Jakarta. Prabowo is both a New Order and a military man through and through. Ergo, his much-vaunted “experience” is experience of a highly-centralised and highly hierarchical system, a system that does not currently exist except in the mind of Jakarta-centric politicians and analysts. He has exploited some aspects of decentralisation quite brilliantly, notably by co-opting his erstwhile enemies in Partai Aceh. In daily life, though, he seems not to register how strongly many Indonesians feel about liberation from Suharto’s brand of Javanese colonization. One tiny but perhaps telling indication of this came in this impassioned campaign speech in Medan, where he broke into Javanese. That should be anathema for a politician campaigning in proudly independent-minded North Sumatra.

Prabowo speaks more convincingly than Jokowi of the need to spread wealth throughout Indonesia, it’s true. But my sense is that 15 years of increasingly fragmented decentralisation have, for better or for worse, taught people to care deeply about their local identities. Outside of Java, Indonesians want to make their own decisions and mistakes, not to inherit Jakarta’s. IF a majority of Indonesians were to indulge their nostalgia for a “tangan besi” — an Iron Fisted ruler — and elect Prabowo, they should not be surprised if he tries to re-centralise power. It’s a big IF, though I think that Hamish Mcdonald provides interesting reflections on Prabowo’s enduring appeal. For what it’s worth, my own totally unscientific conversations with hundreds of Indonesians around the country before the formal start of the campaign revealed a fair bit of “What this country needs is an iron fist” in Java, and a great deal of “All leaders are corrupt, but not all of them abuse human rights” in other parts of the country, the latter sentiment often followed up with: “Of course the Bupati’s a crook, but at least he’s OUR crook”. Since over 60% of the voters are in Java, there’s a real possibility that the tangan besi will prevail. That ought to be worrisome for both voters and politicians who want to hang on to their new-found powers at the district level.

[If you want to read the Foreign Affairs essay but don’t want to access Foreign Affairs it through their free sign-up, here’s an html version. There’s an interesting analysis and helpful translation of Prabowo’s Medan campaign speech by Liam Gammon here.]

1 Comment on "Prabowo or Jokowi: does it really matter?"