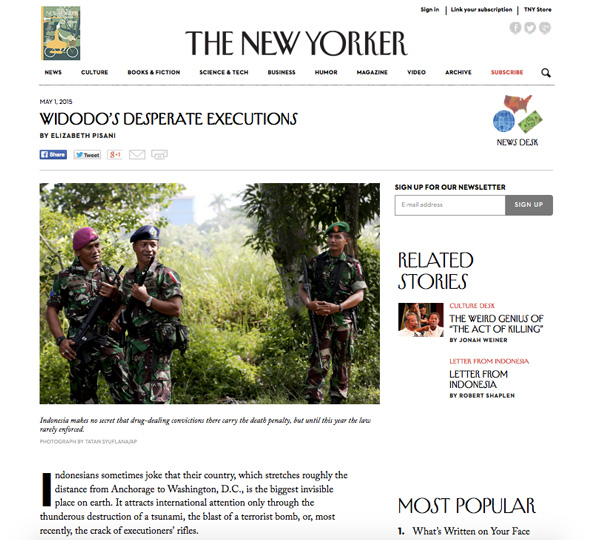 Several times over the last months, I’ve been asked to comment on the impending execution of convicted drug dealers. I’ve always refused, largely because I thought I’d just be fuelling hysteria about something that wasn’t actually going to happen. Then, just a few minutes before I was about to speak on a panel called “Death Sentences” at the University of California Irvine, I heard that Indonesian police had indeed pulled the trigger on eight people, one of them mentally ill. On the panel with me were two extraordinarily talented journalists, Amy Wilentz and Erika Hayasaki, both of whom have written movingly about death in different contexts. The topic was a grim pun signalling the challenges of writing compellingly about disease and death; the events in Indonesia made it a lot more topical than I had hoped.

The following day I was scheduled to give a talk at UCLA about Indonesia. It’s not an easy sell; even in a university with a strong Southeast Asian studies department there are only a handful of people working on Indonesia. So it was with mixed feelings that I noted at breakfast that Indonesia had made it to page 3 of the Los Angeles Times. Then I looked at the dateline:

The story was written by an LA Times reporter in Johannesburg. That’s how much attention the world’s fourth most populous nation merits even in one of the more Asia-facing cities of the world’s third most populous nation. As I said in this piece I dashed out for The New Yorker, it seems to be only the sound of tsunamis, bombs and firing squads that brings Indonesia to the attention of the world. What’s puzzling to me is that seems at the moment to be a source of pride to many Indonesians.

We know that Indonesia advertises the death penalty for drug dealing, and we know too that as a nation, it feels very strongly about its sovereignty. We know it hates being preached to by holier-than-thou neighbours, especially when, as with Australia in this case, they are themselves guilty of (lesser but more frequent) abuse of the rights of marginalised individuals in pursuit of political goals. Australia’s hysteria about uncontrolled immigration is just as irrational as Indonesia’s hysteria over drugs. We know that Jokowi is deliberately overstating the drug catastrophe that threatens to engulf the nation. Indonesian readers can find the executive summary of BNN’s
survey of drug user among young Indonesians here; loosely comparative data from Europe and the US are here. To summarise, drug use among young people in Indonesia does not reach a tenth of the levels that it does in many richer countries. It’s hardly going to wipe out a generation.

What I didn’t know was that Jokowi would not take the high road. I expected him, at the last minute, to make a big public showing of how magnanimous he (and by extension the civilised and ultimately humane nation of Indonesia) really is. Apparently, his own position is now so weak that he felt the need to grasp for the support of Indonesians through fair means or foul. I do not question Indonesia’s RIGHT to carry out the death sentence in accordance with the law, except in cases where the defendant is clearly mentally ill, or where the law may have been mis-applied by judges of dubious probity. In several of the cases which ended with bullets on Thursday, in other words. What I do question is Indonesia’s DESIRE to kill low-level drug mules. Some 86% of Indonesians approved of the killing in one poll. (Over 50% also wanted to see people put to death for corruption, which would certainly hollow out the government and the political parties; Indonesians are more indulgeant towards terrorists, however, with only 2% supporting their execution.)

To me, the most depressing thing about Jokowi’s desperate grasp for popularity at home is that it may just work.

For the record: Following edits, The New Yorker piece suggests that the US is doing better than Indonesia at harm reduction. Actually, it’s a toss-up. Indonesia has better laws but arguably worse practice. In the US, federal law remains antediluvian, but some cities and states do quite well in practice at helping injectors stay safe.

What drugs are they on? Madness in Indonesia’s jails