On Wednesday, Joko Widodo will serve his 100th day as president of Indonesia. Though he has achieved some important victories, things are not going well for him right now, and some of the decisions he is making are likely to make things worse in the future. I’ve described why in the Nikkei Asian Review: 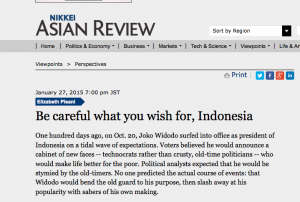 (Read the rest of the Nikkei piece here. I conclude that Jokowi’s need to appear decisive in the wake of a handful of grave political blunders has led to some very poor policy-making.)

The appointment of Budi Gunawan as police chief has turned up the volume on a chorus that sings doubts about the president’s political independence. As I said in the essay, that there are only two likely explanations for his attempt to appoint a man widely suspected of corruption to head the national police: either Jokowi is bowing to the demands of the political Old Guard, or he is grossly incompetent. On the evidence of this interview given on his 98th day at the helm (which I had not seen when I wrote the Nikkei essay) I would have to agree with Daniel Ziv that the Indonesian president is not currently in charge of his own faculties, let alone the country.

It’s almost painful to watch Jokowi’s performance during that interview, the more so because it seems so tragically reminiscent of the once grandiose Sukarno’s speech when he formally handed over power to his successor Suharto, who had essentially kept the father of the nation under house arrest for over a year. Interestingly, while footage of Sukarno’s inauguration is all over Youtube, it is very difficult to track down the film of the broken president’s handover to his very decisive successor. (I think I saw the heart-breaking archival footage of that scene in Curtis Levy’s documentary about Indonesia, Riding the Tiger.)

I hope Indonesians will be able to temper their inevitable impatience with the weakness Jokowi is now showing. Let’s not forget that while his opponent Prabowo Subianto would certainly be more decisive and forceful, he would very probably force through things that are a lot worse than the we’ve seen from Jokowi so far, despite his alarming missteps. It’s worth noting, too, the total absence of Vice President Jusuf Kalla from the current scene. Anyone might think that he was trying to distance himself from the president while biding his time for the inevitable takeover…