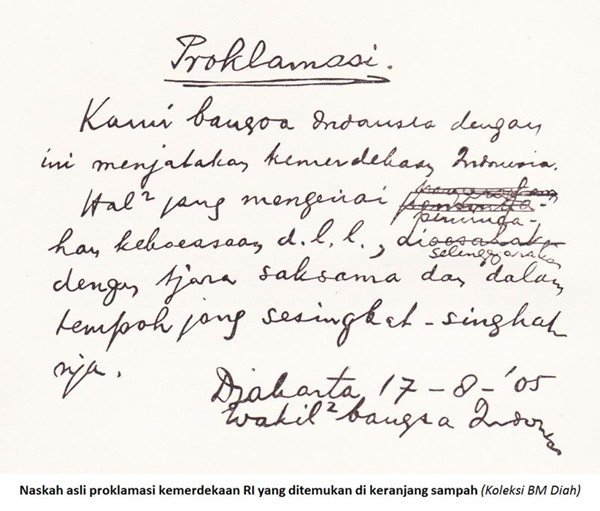 Seventy years ago today, Sukarno and Mohmmad Hatta were frog-marched to a radio station by students hungry for independence. There, they declared the formation of the republic of Indonesia. Both the text and its original presentation in Sukarno’s handwriting (pictured above, rescued from the waste-paper basket) tell us much about the country. It translates as:

We the people of Indonesia hereby declare the independence of the Republic of Indonesia. The details of the transfer of power etc. will be worked out carefully and as soon as possible.

Jakarta, 17-8-05
Representatives of the people of Indonesia

The date is taken from the Javanese calendar. The crossings-out reflect the imprecision of the Malay language in which it was written. Though Malay was adopted as the national language, it was not the mother tongue of any of the founding fathers; perhaps they struggled to find just the right word for this momentous declaration. The content — and especially the Etc. of which I’m so fond and which I used as a title for my book — reflects the imprecision of the very nation itself. At the time of the declaration, the nationalists were not even agreed on what territories it covered, and most other nations took four years to agree that it even existed. My personal favourite, however, is the way the last word, Indonesia, gets squished down into a little curly tail: forward planning has never been the nation’s most obvious strength.

The last six decades have seen many Etc.s: riotous multi-party democracy (centralised), “guided democracy” aka dictatorship under Sukarno, a “New Order” aka dictatorship under Suharto, and many stripes of “reformasi” aka riotous multi-party democracy (decentralised). There will doubtless be many more to come. Indonesia is a nation that will live always in interesting times.

I wish the nation and its people very many happy returns. A propos of nothing, so does Google, which for some reason pleases me. 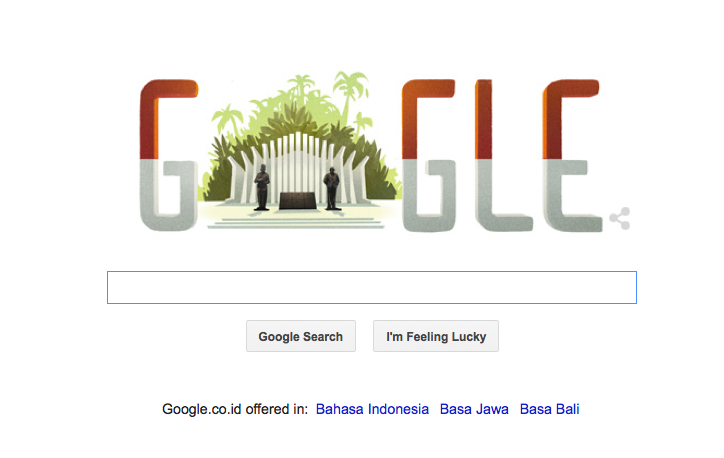