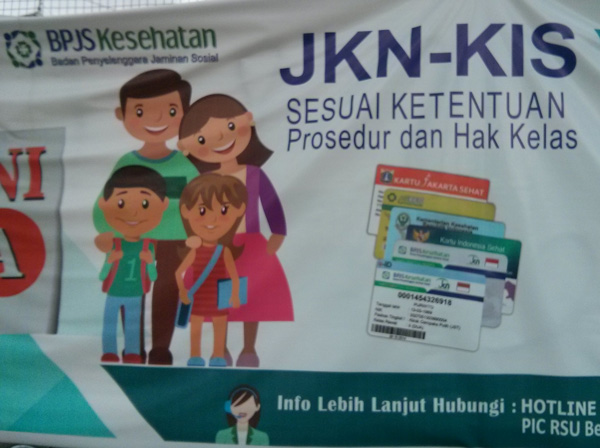 Since its very inception, Indonesia has been given to committing itself to unlikely projects with virtually no preparation. Nationhood, for example (1945). Rice self-sufficiency (1970). Dramatic decentralisation (1999). Most recently, in 2014, universal health coverage. By 2019, it was summarily declared, all Indonesians would be included in a single national health insurance scheme. All of these grandiose declarations were greeted with howls of scepticism from colonisers or so-called development partners; there was a great deal of “they’ll-never-do-it-without-us” thigh-slapping/hand-wringing. Each spectacularly unlikely venture was followed by a few years of chaos. There was a lot of ‘make-it-up-as-we-go-along’ and ‘let’s-see-what-we-can-get-away-with’ on the Indonesian side, and a certain amount of schadenfreude on the development partner side. Then comes the ‘hmmmm,-let’s-try-this-instead’ phase. And eventually, usually far more quickly than any of the hand-wringers predict, the country arrives at a workable system, which involves a bit of creative flexibility (a.k.a. muddling through), but which pretty much achieves the previously unthinkable goal.

When the Universal Health Coverage goal was first declared, I was among the sceptics. Maarten Kok and Kharisma Nugroho and I traced the political origins of the healthcare-for-all pipe dream, pdf), from the 1960 health law to the birth of the current BPJS/JKN system. What we found was a microcosm of what’s going on in Indonesian politics in general. First, the state fails to meet its welfare goals for a couple of decades, doing only the bare minimum to meet immediate political priorities. Then, it pulls in “development partners” to help stave off a national crisis. This creates a sense of entitlement, which persists into our current, more democratic era. One or two bold innovators at the district/city level begin to deliver what the population hopes for, sometimes more. This catapults them to further electoral success, attracting the attention of other aspirants, including those at the national level. Suddenly, popular programmes such as health coverage become “must-have” campaign items, spreading around the country, and eventually co-opted at the national level. (That’s a great simplification — you might need to read the whole paper pdf.) Suddenly, it really seems plausible that most Indonesians will be able to get affordable care for most of what ails them physically, without bankrupting their extended family. Perhaps not quite by 2019, but probably before the richest country in the world manages to achieve the same goal.

The hand-wringers and thigh-slappers are of course keen to point out that what doesn’t bankrupt families may well bankrupt government — the premiums for those deemed “poor” are picked up by the state, and the contributions of those who are in informal employment but not formally poor are deemed to be lagging. Over the last three weeks, however, I’ve spoken to a fair number of those people in the less developed areas of four provinces — East Kalimantan and West, Central and North Sulawesi. I expected a great deal of “why pay if you’re not sick?” and a fair bit of whining about long waiting times and poor service. I have been sorely disappointed. Most people I’ve met on ferries, in buses, in village health centres or working in the fields say they pay their premiums — most often at the lowest band of 25,000 a month — and are proud of it. The only real complaints I’ve heard are from doctors, who are cross that they can no longer charge whatever they please, and from local politicians in very wealthy areas, who feel that their visible generosity to voters has been hijacked by the central government.

Yes there are inefficiencies. Yes demand is escalating more quickly than the ability to meet it. Yes, the BPJS bureaucracy is short-circuiting some of the standard-setting and oversight work that should be done by the ministry of health. Yes, many people have been erratic in paying their premiums. Yes, the overlapping political claims on the health insurance brand have caused a bit of confusion (see photo above). But the system is adapting pretty quickly, with new restrictions on coverage for those in arrears, and an increasing array of ways of signing up and paying. (Where else can you pay for your health insurance at the local mini-mart?)

The hand-wringing will doubtless continue, but I don’t hear very much of it coming from people who can now get care that they wouldn’t have imagined just three years ago. Universal health insurance etc.: it’s a damned good start. Someone should tell Donald Trump.

The Indonesian government forgot to buy medicines. Now what?

Indonesian kids are starving to death: where are the health services?