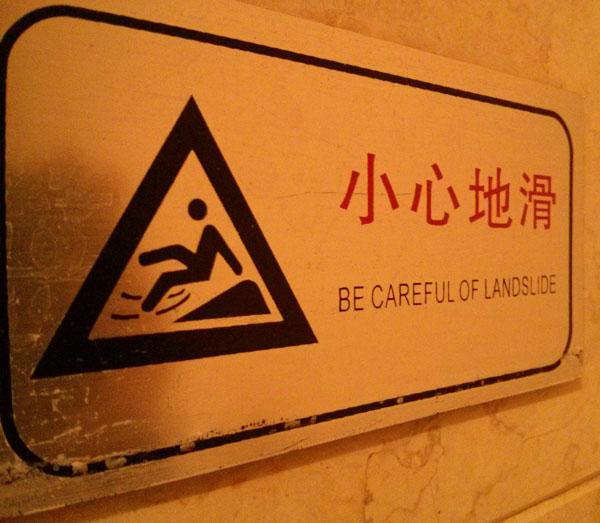 On a fleeting visit to China, I find that my hotel is warning of the danger of landslides in the bath. It’s funny, but also a little ridiculous. Someone diligently trawled the internet, found the graphic of someone slipping, copied the accompanying text, sent it off to be engraved onto little brass plaques, then cemented them in to the hundreds of bathrooms in this monstrous provincial government-owned hotel, an otherwise dead serious temple to shabby bling.

Indonesian hotels probably wouldn’t go to so much trouble. But even companies that really do care about their international image, such as the new-look flag-carrier Garuda Indonesia, make themselves ridiculous simply because they don’t want to shell out for a native English speaker to read their copy. A couple of examples from their recently relaunched website: 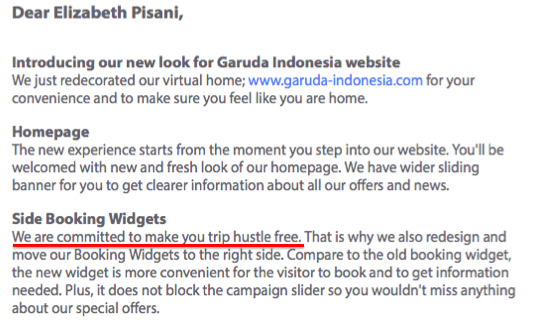 Of course I’m delighted that Garuda offers hustle-free travel, but I sort of assume that the national airline isn’t going to shake me down. Hassle-free travel in Indonesia? Now that really would be a bonus…
I’m thrilled, too, that the web designers pay so much attention to detail. Acceptable grammar is not, however, a detail if you are repositioning yourself as a competitor for high-end Asian airlines serving the European market.

Why can’t Garuda afford a native English-speaking copy editor? Perhaps because that’s a job usually performed by native English-speaking teachers at weekends and during school holidays. But Indonesia is making it all but impossible to employ native English-speakers in language schools. To teach English as a foreigner in Indonesia, you have to have a degree in English (nothing else will do: philosophy, history, education degrees are not acceptable, even if they come from Oxford or Harvard). After that you need to spend five years teaching somewhere else. Only then can you apply for a job that pays around US$ 1,200 a month.*

Of course if you are Indonesian, you need none of these qualifications to teach English. The result is that places like the amazing Kampung Inggris (“Englishtown”) in Central Java, which boasts over 180 English schools, has not even a handful of native English-speakers among its teachers. As one student said to me, in English: “The teachers, they do not speak English too.” It is hardly surprising that 44 percent of business owners surveyed by the World Bank across Indonesia identified a working knowledge of English as a gap in the skills of their managers. That’s higher than the 36 percent who had no real computing skills, and the third who lacked basic thinking skills. No comment.

Indonesia’s bureaucrats are making it harder for Indonesians to acquire the skills they need to compete internationally (and domestically too, especially from the end of this year when ASEAN is supposed to embrace the free movement of skilled labour). At the same time — no coincidence? — they are making it harder for businesses to hire outsiders to make up the deficit, by requiring foreigners to be proficient in Indonesian before they even arrive in the country *. I actually think that any intelligent person planning to spend more than six months in Indonesia should invest in learning Indonesian, and I have no problem at all with any country requiring that prospective citizens learn the national language. But a tit-for-tat response to the requirements made of the unskilled workers that Indonesia exports by the million to the Middle East hardly makes sense in this context. If you think it’s hard to find a decent native English speaking teacher in Pontianak or Palembang, try finding a decent native Indonesian speaking teacher in Manchester or Bonn. In the meantime, you could look back at my lessons in essential Indonesian in under five minutes, written for expat lawyers in Indonesia.

*These details are remembered from a Jakarta Globe story, which I read some days ago. The link should take you to it, but for reasons known only to the Great Firewall of China, I can’t access the story from Beijing, so apologies if I’ve mis-reported any details.

3 Comments on "Bad language is bad for Indonesian business"