While Indonesia’s Christian churches do their best to get people excited about Christmas, the pine tree iconography has a hard time competing with the palm tree reality. Local Christmas trees are mostly made of hoops of ugly white tinsel, like the tattered hooped skirt of some antebellum Cinderella. I did, however, like this variant made of discarded water bottles which I found in Kisar, in Maluku. Quite by chance, whiling away the night on a dock on another island with a little rant about litter, I commented on this inspired use of rubbish. It turned out that Bpk Elis, who I was talking to, was the designer of the very tree I was describing. 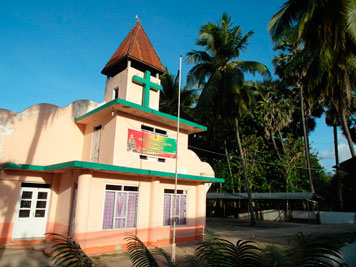 Though I’m in the most stoutly Christian part of Indonesia, the frenzy of consumerism is mercifully muted. This was certainly true in the village of Ohoiwait in the Kei islands where I spent Christmas with no electricity or phone signal, no gift-giving, but some desperate showing off of frilly new dresses at the three church services I went to in two days. In villages like Ohoiwait kids are used to making their fun from whatever is at hand. Tyres whipped along with sticks are still popular among boys, and spinning tops provide hours of competitive fun. But for sheer something-out-of-nothing genius, this helicopter sort of thing, made from a hollowed out mango stone, a whittled stick and a piece of string, which I found in a three-house hamlet in West Sumba, surely rates right up there.

2 Comments on "What to get the kids for Christmas? A mango stone helicopter"