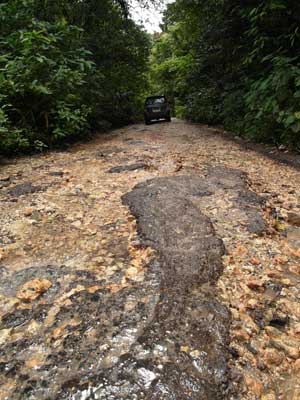 The road to one of the world's biggest asphalt mining areas

Asphalt. It’s not something I’ve ever given much thought to, except to wish there were more of it under the wheels of my car (Kenya) or motorbike (Indonesia). But now I’m in Buton, the island in Southeast Sulawesi which is one of the world’s largest suppliers of the stuff of which dream highways are made, so I thought I’d go and see an asphalt mine.

I say “mine”, but in eastern Buton you can walk across the slightly bouncy ground, bend down and pick up chunks of pure asphalt with your bare hands. It requires virtually no processing: scrunch it up a bit, roll it out and you’ve got a nice new road. The Buton Asphalt Indonesia company’s website proudly showcases the billard-table smooth roads that China builds with asphalt from Buton. And certainly China’s hungry for tar. A mainland Chinese company has piled up 50,000 tonnes of the stuff on the wharf I visit; the asphalt mountain stretches off into the distance, for all the world like an old-fashioned Welsh slag heap. It is scheduled to be dispatched to China that very night (five weeks after Indonesia’s ban on the export of raw minerals came suddenly into effect, but that’s another story…).

The local government does nicely out of this business. Each existing mine needs at least four different types of licence (environmental, business, mining, “exploitation”), none of which is free. There are taxes and royalties. And some of the mines are owned by local politicians. The potential for future earnings is huge: it’s estimated that there are reserves of about 3.6 billion tonnes of natural asphalt in Buton; at current prices that’s a “street value” of US$360 billion. So answer me this: why did it take me over three hours to drive the 78 kilometres from the main city of Bau Bau to the asphalt mining area? Why does the local government not spend just a little bit of that revenue buying some of the asphalt hacked out of the ground in its very own district, and laying it down on the road pictured at the top of this post, the main thoroughfare leading to Asphalt Central?

Credit where credit is not due

Indonesia gets investment status, but where’s the investment?

Spicing up capitalism: in praise of monopolies