Not trusting to the vagaries of shonky inter-island passenger ferries, I scheduled my visit to Sumba so that I could move on to Sabu, an even drier and poorer island in NTT, on the fortnightly PELNI boat. Needless to say, just for this one fortnight, PELNI is having the barnacles scrubbed off it. The shonky ferries are “lagi kosong” — “currently lacking”, a phrase that strikes horror into the traveler’s heart in much the same way that “rail replacement bus services” does to users of Britain’s creaky and overpriced trains. There was a weekly flight on an eight-seater plane for a while. But the company that ran the service had a plane “disappear” a couple of months ago, That made the aviation authorities a bit suspicious, so they pulled the company’s license.

So I found myself on a shonky ferry after all, going to a quite different island. There are three classes of transport: VIP, 1A and economy. The principal difference between them seems to be the volume of karaoke/music played.Oh, and the expensive classes have seats, which makes it harder to lie down. I usually opt for economy, and have learned that arriving early and staking out territory is nine tenths of the law. 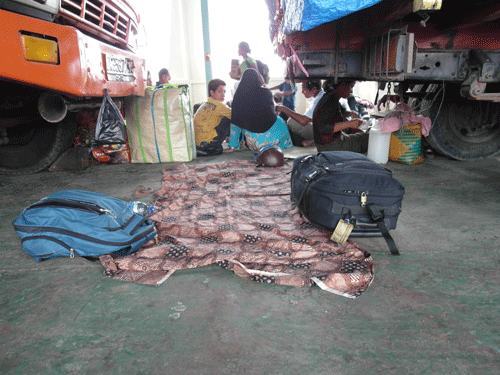 I opted for the space between two trucks. pissing on the proverbial patch with sarong, backpack, and Singapore Airlines frequent flier Gold Card. I wound up sharing the space with a Granny I had met a few days before while searching for a Granny I had buried 20 years before that, but mostly I held my own. As you can see, the space fills up rather quickly.

Still, it’s a good way to travel. The price is right — about eight dollars for a 12 hour trip (though more if you want the karaoke). You can chat to (most of) the other passengers, and learn a bit about this nation on the move. The Sumba-Kupang ferry was pretty well filled with men going to work on some “proyek” (which usually means road construction) in northeast Flores, and women going to work in Malaysia. “From West Sumba, the diligent ones,” explained one lady who was herself going to burn candles over her mother, who had died in Flores. “Here in the East, we’re too lazy.” 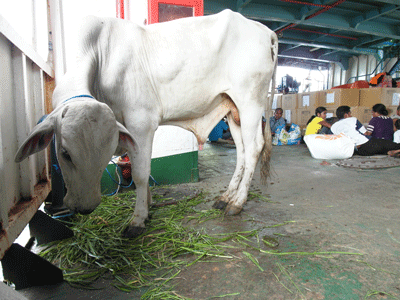 No country for animal lovers

2 Comments on "Indonesian Ferries: possession is nine-tenths of the law"