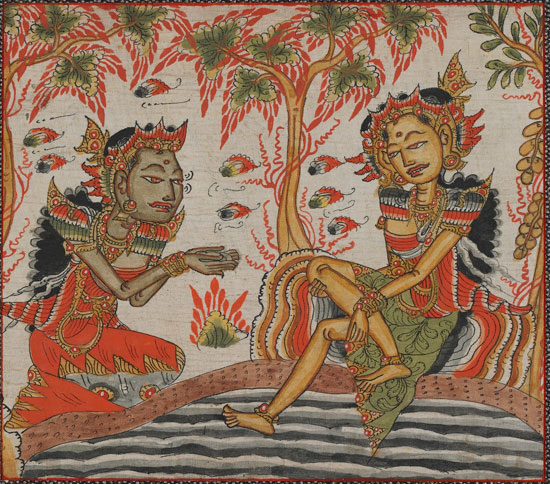 Two Figures Conversing Beside a River, from the Freer Gallery of Art and Arthur M. Sackler Gallery

Unless they are credited to someone else, most of the images in these blog posts are photos I took myself and let’s face it, they don’t really do justice to the visual glories of Indonesia’s many cultures. So I was delighted to learn that the Asian branch of the Smithsonian museum, the Freer/Sackler galleries, have made images of the objects in their collection available for non-commercial use. The originals are in very high resolution, so that you can zoom right in and rejoice in the gentle scratching of time at the magnificent artworks of the past. 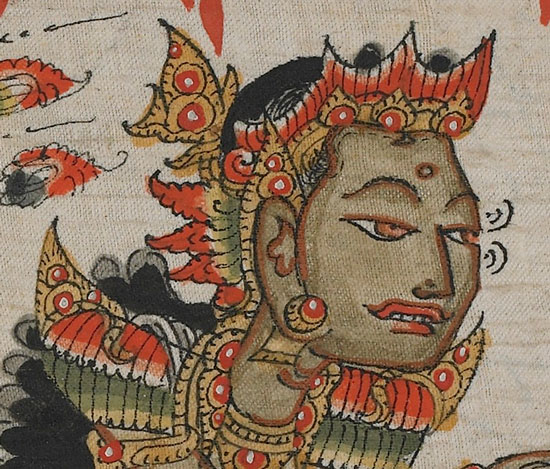 Close-up of a Balinese noble in conversation

The Freer/Sackler collection of Asian art provides digital access to around 40,000 works of art, including paintings, manuscripts, ceramics and sculptures. On discovering this treasure trove I, of course, rushed for the Southeast Asian collection and searched for works from Indonesia. There are a total of eight. Not 8,000, or 800: eight, and one of those is a modern fake of an old Vietnamese piece. That compares with 3,503 pieces from Thailand and 111 from tiny Cambodia.

I’d been vaguely aware of the paucity of Indonesian pieces in collections in the US and the UK after searching for the archipelago in the Metropolitan Museum in New York and the British Museum and the V&A in London. In each, the arts of the islands are scattered in dusty corridors connecting artistic geographies that are considered more worthy of attention, though when you find them they are well worth a look. On the one hand, I guess one should be pleased that Indonesian art is under-represented, because it suggests that less of it has been carried off to foreign shores to sit, under-appreciated, in “rape and pillage” museums to be suffered by parties of schoolchildren more likely to find wonder in a PlayStation animation of an amulet than in the real thing.

On the other hand, Indonesian museums are not noted for being good guardians of the national treasure. When four important pieces of Javanese gold were stolen from the National Museum in September 2013, officials fessed up that the CCTV system, installed in the early 1990s and never updated, had been on the blink for over a year, and the alarm system had been down for at least two months. In central Java, museum curators have been busted for stealing religious statues and replacing them with fakes. The caretaker at a museum I visited in the former Sultan’s palace in Buton handed me a golden helmet that looked like it came out of a kid’s Halloween gladiator costume kit. Expecting featherlite plastic, I was surprised to find it leaden. It was a 16th century original left by a Portuguese soldier, and had been spray-painted gold for a tourism festival a few years ago. Jakarta’s main art museum hangs paintings on walls so mildewed that the artworks smell positively mossy, and of course very little is displayed at all engagingly.

That cannot be said of foreign collections. Last summer, when I was whiling away time in the Yale University Art Museum, I stumbled into a room uninspiringly marked “Indo-Pacific Gallery”. There I found one of the best collections I’ve ever seen of art from the archipelago, an eccentric mix of high-faluting Javanese gold and more “ethnic” carved objects largely from the Eastern islands, together with some exquisite textiles. The collection really underlined for me the fact that the display of art and artefacts is an art in its own right. There’s stuff in that museum that looks a lot like things I have kicking around in the bottom drawer in my kitchen, waiting to be used to serve vegetables at my dinner table. Would it look that good if I took it out of the spoon draw and suspended it, spotlit, in a glass case lined with grey velvet? Perhaps. But I’m even more pleased to think that Indonesians use their beautifully carved spoons just as I do. They continue to live and breathe their art, to integrate it into their lives, not to calcify it, however prettily lit, in hushed galleries for the admiring few.

Take an exquisite gold mamuli ornament, for example. Mamulis are worn as earrings or pendants. No girl of good family can get married without a mamuli in Sumba, and though they were once exquisitely wrought, the finer work necessarily suffers as they are stored in the soot-encrusted treasure chest that hangs above the hearth of all Sumba clan houses, and when they come out for funerals or important festivals such as the one pictured here that celebrates the end of the holy month of Wullu Podu. 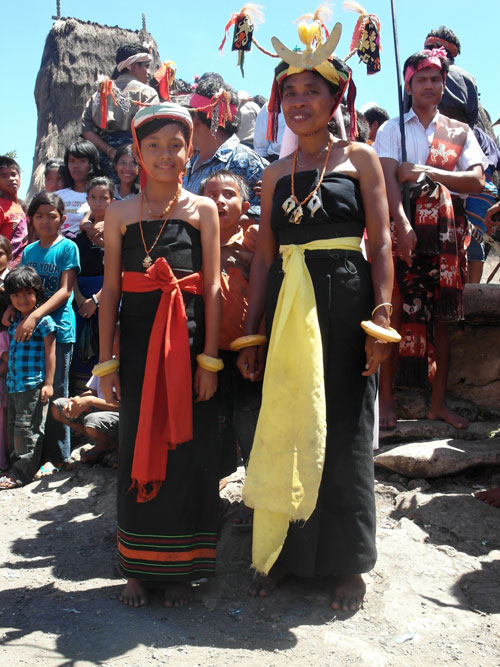 For three days my friend Asti and her aunt wore these precious items as they danced around in the dust, flirted with the warrior boys, had their futures read in the entrails of a chicken and served food to their clan’s hundreds of guests. When, two decades ago, I added a mamuli to my own rape and pillage collection, I thought I was giving it a relatively good home. Then I saw the one in the Metropolitan Museum’s collection, immortalised here by a professional photographer. I guess you can tell which is which; the one I like best is still the one hanging around Asti’s neck.

Of course if you want to see Indonesian art and can’t see it in its living form, the next best place is The Netherlands, which did a fair amount of rape-and-pillaging in its time, and which has spectacular collections from across its former colony. The curators in Dutch museums have tread carefully over their nation’s past in the islands, and the result is instructive. Amsterdam’s Tropenmuseum, gives a good account of the Netherlands East Indies. More neutral (and stronger on artefacts and presentation than on narrative) is the Museum of Ethnography in Leiden — less than 25 minutes door to door from Schipol airport. They have a fascinating set of dozens of carved dolls made for Dutch Queen Wilhemina when she was a child, each representing a different ethnic group from across the islands. Like the 27 provincial costumes in the atlases of the Suharto years, they are all tidily dressy; no bare breasts or kotekas for the Queen.

Leiden has always been a particular centre for scholarship about Indonesia, and it has strengthened that commitment by acquiring a large part of the Tropenmuseum’s collection of maps, documents and manuscripts, which were up for grabs because the Dutch Foreign Ministry no longer wanted to pay for their curation. Some have gone to Alexandria, but many have shipped up in the fabulous new Asian Library at Leiden. Again, much of the collection is digitised and available on line in very high resolution, including many fabulous maps. Because this will probably be my only arty post this year, I leave you with part of a map of Semarang, showing all the poulders that once stopped that beautiful city from sinking. 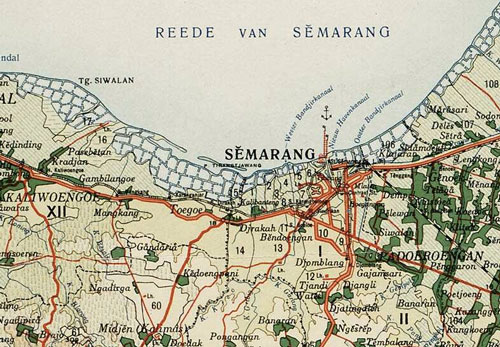 5 Comments on "Indonesian art lives, though not in overseas museums"