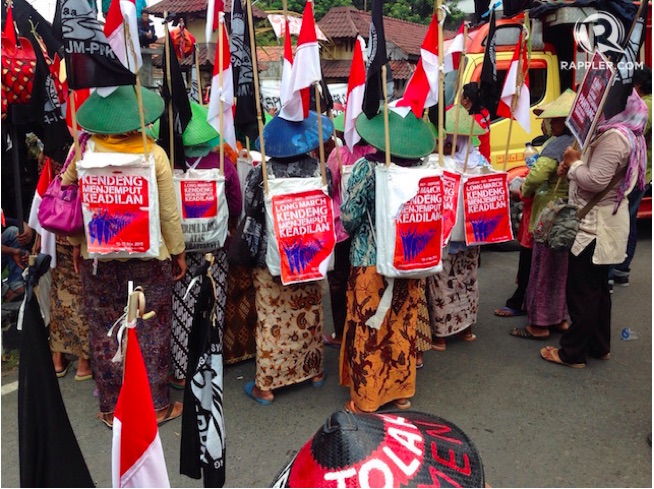 Some decades ago, the US anthropologist Clifford Geertz coined the phrase “Theatre State” to describe politics in Java and Bali. The Powers That Be in many countries use pomp and pageantry to project power but Geertz’s point was that in Java, the strutting and preening was power, the display had become a substitute for government. In this essay in the Nikkei Asian Review, I suggest that in this democratic age, Indonesian citizens are taking over the stage. A great recent example are the farmers of Kendeng, pictured above, who recently trekked 122 kilometers on foot to attend a court case that they had brought against a polluting cement factory. There’s no doubt that they had costume and set designers to help out with the performance — check out the matching backpacks. But their theatrics worked: the court denied permission to go ahead with the factory.

This week, we’ve seen some more serious theatrics, on centre stage in the House of Representatives in Jakarta. There, obviously against the will of some of its members, the House Ethics Committee was made to sit through an audio recording of parliamentary speaker Setya Novanto trying to shake down the head Freeport McMoRan Inc’s Indonesian operations, to the tune of some four BILLION dollars. Freeport Indonesia runs the world’s largest gold mine, and that’s not even its day job: the Grasberg mine, in the fractious far eastern province of Papua, is principally a copper mine. It makes a lot of US shareholders very rich and is Indonesia’s biggest tax payer. Its contract comes up for renewal in 2021, and the company is trying to get some indication from the changeable Indonesian government whether it is worth investing billions of dollars now in long-term operations, something that it is naturally reluctant to do if there’s a good chance it will be kicked out in just five years time.

Wednesday’s instalment of the morality play, shown live on Indonesian TV starred Indonesia’s Minister of Energy and Mineral Resources Sudirman Saeed. With dignity and some determination, he stood his ground in the case that he himself brought against Novanto, and in the end the court agreed to hear the recording. In the three-way conversation Novanto, who belongs to the Golkar party that dominated Indonesian politics through the Grand Patronage era of the Suharto years, and squillionaire Muhammad Riza Chalid, suggested to Freeport boss Maroef Sjamsoeddin that they could smooth through some assurance of long-term contract renewal. All Freeport had to do was put 20 percent of the Indonesian company’s shares into the pockets of President Joko Widodo and Vice President Jusuf Kalla. (Here’s the transcript of the conversation, which also contains lots of catty remarks about relations at the very top of Indonesia’s government, and some breathtakingly arrogant assertions about Novanto’s own powers.) Sjamsoeddin showed up in the parliamentary theatre on Thursday to confirm that the recording was genuine.

So what’s the next act in what threatens to be Indonesia’s biggest corruption story to date? Well, we’ll have to wait. In the time-honoured fashion of Indonesian politicians, the House of Representatives if going off on a study tour. And really, what better place to learn about ethics in government than Russia?

If you’re interested in the modern expression of the Theatre State in Indonesia, you might enjoy this little video I made in the outer reaches of Halmahera:

3 Comments on "High drama in the Indonesian Theatre State"