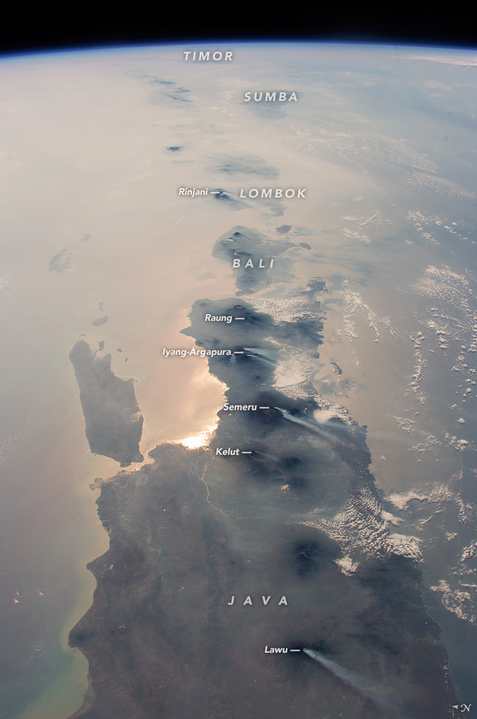 Image from NASA via Earth Observatory

Let’s for once leave politics and the perfidy of men behind, and revel in the beauty of the earth and the ingenuity of mankind. The photo of the volcanoes of East Java and beyond comes from the International Space Station, courtesy of NASA (and the US taxpayer). You can download a bigger version without the text labels here (jpg, 6kb) and find the source here. But I’m copying the text in full, because, well, because I find it fascinating. Thanks to Kharisma Nugroho, who knew I would.

As an equatorial country, Indonesia is often obscured by cloud cover. An astronaut aboard the International Space Station recently seized the opportunity of a relatively storm-free day to photograph nearly half the length of Indonesia’s main island chain. Using a short lens and looking to the horizon for a panoramic effect, the astronaut captured this vast view that includes both clear skies and a murky, region-wide smoke pall. The smoke comes from fires caused by lightning strikes and by forest clearing by humans in Indonesia and northern Australia.

In this photograph looking from west to east, Java is in the foreground, Bali and Lombok are near the center, and smaller islands trail off toward the horizon. More distant islands such as Sumba and Timor are almost invisible; each is more than 1600 kilometers (1,000 miles) distant from the spacecraft. The brightest reflection of the Sun off the sea surface silhouettes Surabaya (population 2.8 million), Indonesia’s second-largest city.

Against this background of regional smoke, a line of volcanoes appears in sharp detail. Volcanoes are the backbone of the islands, which have been formed by the collision of the Australian tectonic plate (right) with the Asian plate (left). Note that the name of each volcano is labeled in italics.

White plumes show that at least six volcanoes appeared to be emitting steam and smoke during this ISS orbit, though some of the plumes could also be wildfire. Even though the plumes are short (80 kilometers; 50 miles), they are prominent because the volcanoes stand above the smoky air layer near the surface. The plumes are also strikingly parallel, aligned with winds from the northeast. Every day, astronauts are sent memos alerting them to dynamic events—such as volcanic eruptions and fires—so that they might observe them from space.

Astronaut photograph ISS045-E-79412 was acquired on October 25, 2015, with a Nikon D4 digital camera using a 50 millimeter lens, and is provided by the ISS Crew Earth Observations Facility and the Earth Science and Remote Sensing Unit, Johnson Space Center. The image was taken by a member of the Expedition 45 crew. The image has been cropped and enhanced to improve contrast, and lens artifacts have been removed. The International Space Station Program supports the laboratory as part of the ISS National Lab to help astronauts take pictures of Earth that will be of the greatest value to scientists and the public, and to make those images freely available on the Internet. Additional images taken by astronauts and cosmonauts can be viewed at the NASA/JSC Gateway to Astronaut Photography of Earth. Caption by M. Justin Wilkinson, Texas State U., Jacobs Contract at NASA-JSC.

Slideshow: The wrath of the land

1 Comment on "For the sheer beauty of it: Java from space"