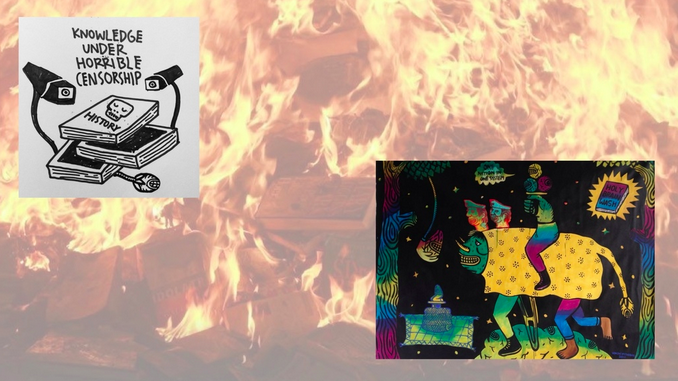 What’s up with the Indonesian government? First, they confiscate toys because the sight of a gold star on a red background might turn Indonesian kids Communist. Then they bully and intimidate the organisers of cultural gatherings into shutting down discussions of history. Now there’s a move afoot to jail people who make fun of others online. It’s supposed to stop cyberbullying. But in truth, Indonesian politicians are themselves beginning to look a lot like the over-fed playground bullies who beat up skinny kids in case the skinnies point out that they’re fat.

I’m certainly not in favour of baseless mud-slinging of the type so favoured by Donald Trump. I despair at the stream of racist invective that has been “permissioned” by Brexit. I believe that societies should arrive collectively at some agreement about the acceptable limits of public discourse. But we shouldn’t let one, privileged group make up the rules as they go along. That’s exactly what the proposed amendment to Indonesia’s already problemtic Electronic Information and Transactions Law does, when it threatens to jail people for posting photos, videos or other content that individuals (politicians, for example) might find offensive. By failing to define “offensive” content, the law leaves Indonesia’s spectacularly corrupt judiciary to decide whether statements like this one, posted on a blog read by a few hundred ardent Indonesia-watchers, merit depriving a person of their liberty. Should they jail me for calling the judiciary spectacularly corrupt? What should they do with the 62.4 percent of people who told CSIS in a large national survey (.pdf) that they wished the government would do more to smash the judicial mafia (membrantas mafia peradilan)? Or the 39 percent who said corruption in the judiciary was the single biggest obstacle to strengthening democracy in Indonesia — far and away the highest proportion compared with all other obstacles?

These persistent assaults on personal freedoms (many of them absurdly masquerading as protection of children) lead to
self-censorship and thus make others suspect that they are not being told the whole truth. Example: Though I’m always happy to assume incompetence before assuming conspiracy, in the current climate I find myself wondering why Indonesia’s largest publisher is two years behind schedule in printing and distributing Begitulah Indonesia, the Indonesian translation of Indonesia Etc. Are they they that much more inefficient than the Polish, Italian, German, Taiwanese and Chinese publishers who managed to get their translations out a year or more ago? Or, given the current climate, have they suddenly grown all wobbly about some of the (fully sourced) comments I make about religion, the FPI, corruption, education or the thousand other things that might be deemed “offensive” in what is actually an extended love letter to Indonesia? With the whole of Indonesian society treading on eggshells in case they fall foul of fuzzily conceived laws, one is left fearing the worst.

One group, InterSastra, is reacting in a small but delicious way to these threats to freedom of expression (and thus to freedom of thought) in Indonesia: they’re planning to publish a series of banned literature, translated into Indonesian. Regular readers will know that I don’t promote products or events, but if you agree that this is an interesting venture, you might want to check out their Kickstarter campaign which runs for another 2 days. For those who consider making a donation but are confused by the Norwegian Krone in which the campaign is denominated, its roughly 10/9/8 Krone to the £/EUR/$ respectively, 1600 rupiah to the Krone.

Indonesian President signs off on semen

3 Comments on "Could this blog post land me in jail?"