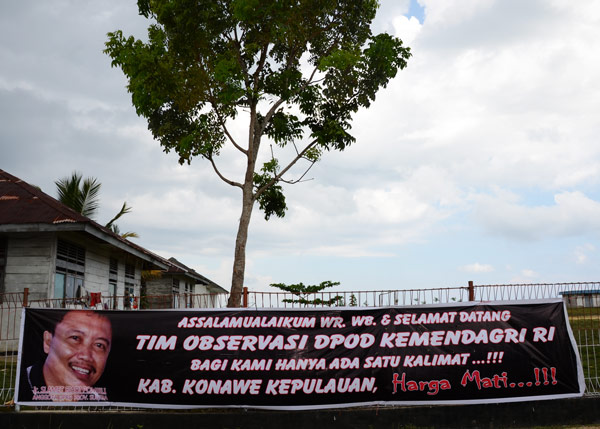 Despite various moratoria imposed by an ineffectual central government, the Indonesian decentralisation Hydra continues to grow new heads. We’ve got a 34th province now officially on the books (Kalimantan Utara), and the tally of kabupaten/ kota has nudged over the 500 mark. And still, they ask for more. The photo above was taken by Melanie Wood, of Gangs of Indonesia fame, on Wawonii island in Southeast Sulawesi. To the visiting team from the Ministry of the Interior, it declares: We have only one thing to say: [We demand] Konawe Island District, at all costs!

“Harga mati”, literally “dead price” is the end of the road in any negotiation. It is the non-negotiable bottom line, the absolute final offer. When travelling around the more fractious areas of Indonesia (Aceh, Papua, even Maluku) one most often sees it on a green billboard outside a military installation:

NKRI is shorthand for Negara Kesatuan Republik Indonesia, so the slogan translates roughly as “A Unitary Indonesia: Non-negotiable!” I find it deeply ironic that the “Harga Mati” ultimatum is being used by local politicians in a call to pick apart of the fabric of the state, to atomise it into ever smaller units, each more and more concerned with its own primordial obsessions. Right now, Wawonii if part of Kabupaten Konowe, which boasts fewer than 250,000 souls. That tiny population already has its own arm of every ministry in the country’s bloated bureaucracy. I didn’t get to Konowe; I got stranded in neighbouring Buton. But if my observations in hundreds of other districts are anything to go by, I’d lay a bet that many of the micro-ministries are staffed by cousins of the Bupati and members of his “TimSes”, the team that successfully brought him through the election. Is it really a good idea to recreate each of those little centres of patronage for the fewer than 30,000 residents, of Wawonii? There would probably be a beige uniform for every single one of them, but how much loyalty would anyone have to NKRI? If Indonesia wants to survive as a Unitary state, it’s going to have to stop behaving like an amoeba.

[Since we’re on the subject of bottom lines, this is mine: I have come to the end of my travels and now have to sit down and write a book, at the rate of about a chapter a week. So no more Portraits for a little while.]

2 Comments on "The bottom line for decentralisation in Indonesia"