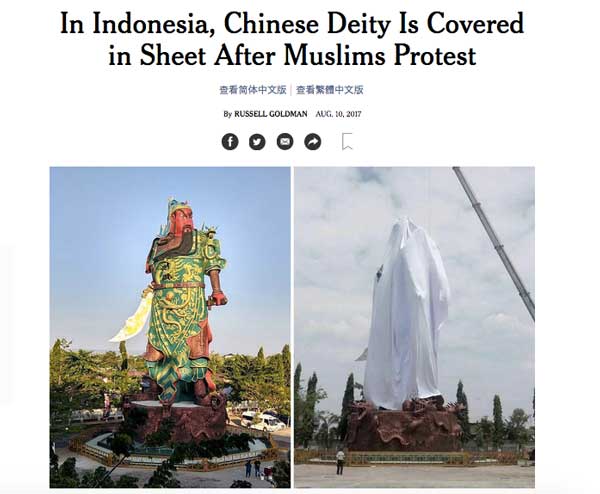 Today, not for the first time in recent months, the New York Times ran a story focusing on Islamist extremists and they threat they pose to Indonesia’s much-celebrated pluralism. A couple of years ago, I argued in a TED talk that Indonesia is invisible precisely because of that pluralism. Now, as the country puts itself on the map for all the wrong reasons, I might be a little more circumspect. And yet…

Of course, I’m upset at the many examples of relgious intolerance that we’ve seen lately, as well as at the re-flowering of the well-established Indonesian tradition of using rent-a-mobs (professing nationalism, anti-colonialism, religious purity, or whatever else happens to be the untouchable flavour-of-the-month) to settle political scores. But in this New York Times rendering of the case of religious intolerance in Tuban, I think the problem might be more cultural (and indeed aesthetic) than political. For those who missed it, the furore is about a huge statue of a long-dead Chinese general, worshipped by some as a God. For me, the clue to what’s really going on is right at the end of the story, the paragraph that few would read:

Didik Muadi, a Muslim who organized the protests against the statue, said Muslims would destroy the figure themselves if the government did not intervene. “Actually, we can allow them to build the statue, just not as high as it was and it should be in the temple, not outside,” Mr. Didik told the news site Tempo. “We are tolerant.”

In other words, the problem is not that members of a minority religion erected a statue to a God-ish war-mongerer. It is, rather, that they erected an absolutely vast statue of gopping vulgarity, that looms very publicly over an otherwise rather beautiful landscape. China has produced some of the greatest and most refined artworks in human history, but the culture also has a pronounced taste for bling. The bling-fest is well represented among the nation’s diaspora, sometimes extending through generations that have no connection with the motherland.

The Javanese have had more than their share of showy princelings, certainly. Their desire to outdo the neighbouring court has left us with the glories of Prambanan and Borobudur — temple complexes which cannot be deemed modest by any standard. But in the modern era, the Javanese have greatly prized modesty. Former President Suharto, for all his accumulated wealth, was esteemed because he did not show off materially (unlike some of his family members). The current president Joko Widodo is popular largely because he is “sederhana” and “halus” — modest and refined. So, before engaging in too much hand-wringing about religious intolerance, please consider the possibility that in this case, the good people of Tuban are more offended by artistic vulgarity than by religious difference.

1 Comment on "Sheet happens, yes, but does the mob really rule in Indonesia?"