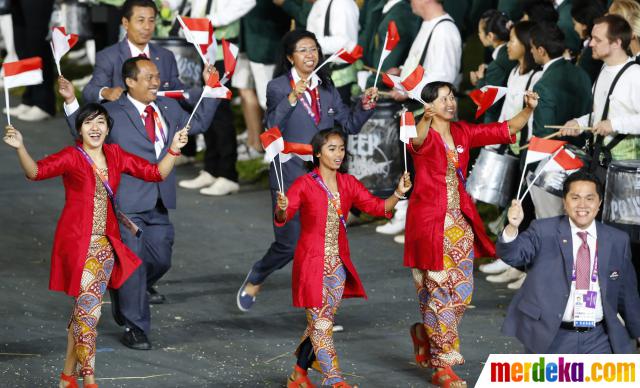 The day before the Olympics began, I ate at a warung nasi Padang hidden at the end of a grubby corridor on the upper floor of a central London shopping mall. Opposite us, a canny Chinese stall-holder had stocked up on flags that visitors could buy to wave around in enthusiastic support of their athletes. Ethiopia, the US, Italy, Cameroon: they were all there. But no Indonesia. Sold out, perhaps? No, said Firdaus who runs the warung; they never had any Indonesian flags. We resolved the situation by buying a Dutch flag and cutting off the blue stripe at the top, but it wasn’t really the same.

Then I went to watch the opening ceremony at Victoria Park, in East London. There were several thousand people there, determined to stay through the Parade of Nations for the treat of the fireworks, which we’d be able to see bursting up from the stadium just a mile or so away. East London is one of the most cosmopolitan places in the world, and as each nation was announced, a clutch of people would jump up from the crowd, dance up and down, wave their flags. Comoros: yaaaaaaay! Fiji: “woooohooooooo!” Indonesia: only me, feeling a bit of a fraud. I didn’t have to cheer for long. With just 22 athletes, not even one per province, the Indonesian team was gone in the blink of an eye.

And as for the games themselves… We’ll pass over the B word, and just note that as of today, August 4th, Indonesia ranks 4th in population in the world but 50th in Olympic medals, with just one silver and one bronze under its belt. Is it any consolation that it puts Indonesia just one bronze behind India, the country that ranks number 2 in population and that is also pants at sports? China and the US are 1/2 and 3/1 in population/medals respectively. There are of course lots of efforts to look at the data other ways: adjusting for population size, number of athletes in London, GDP etc. The Financial Times has very nerdily adjusted for all these factors at once, and concluded that Indonesia is only doing half as well as it should be. Which is perhaps fair enough, since we’re only waving two thirds of a [Dutch] flag in encouragement.

I often wonder why gloriously rich, diverse, self-confident Indonesia punches so far below its potential weight on the world stage. Why weren’t Indonesian flags on sale? Why weren’t there more Indonesians mucking in with the rest of East London to watch the opening ceremony? I feel the answer has something to do with self-sufficiency, a sense that the country has nothing to prove to the outside world, that it’s content with its own little warung of possibilities. But I’d like to know what real Indonesians think.